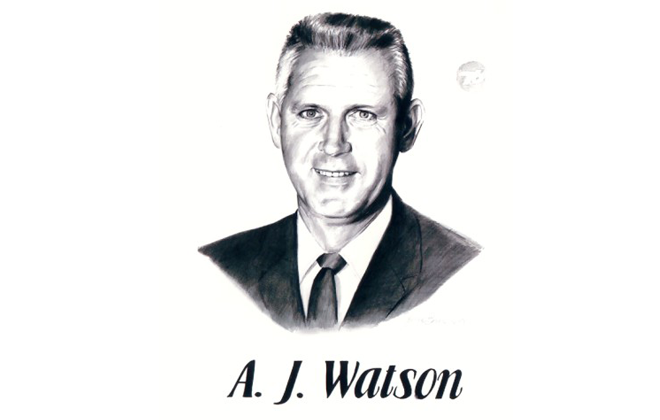 A.J. Watson witnessed his first auto race in 1947, moving him to build a car with a friend. After a one-lap career behind the wheel (he spun out), he changed his focus and became one of the greatest mechanics of all time. Within a year, he was asked to join an Indy crew. After a succession of drivers and owners, Watson built a car for Bob Sweikert in 1955 that claimed his first Indy 500 win. The next year, with the track repaved, Watson knew the speeds would go up causing more tire wear. He built a much lighter, slimmer car for Pat Flaherty, who won the race. In 1959 Watson teamed with Rodger Ward and team owner Bob Wilkie to form the potent Triple W team. Ward and Jim Rathmann finished 1-2 in Watson’s cars, then swapped positions in 1960 to give Watson his second consecutive 1-2 finish. Ward won again in 1962, leading a parade of six Watsons in the top eight. In all, Watson built some 23 roadsters, including the last Indy 500 victory for a front engine in 1964, driven by A.J. Foyt. Watson remained partners with Wilkie until Wilkie’s death in 1970.