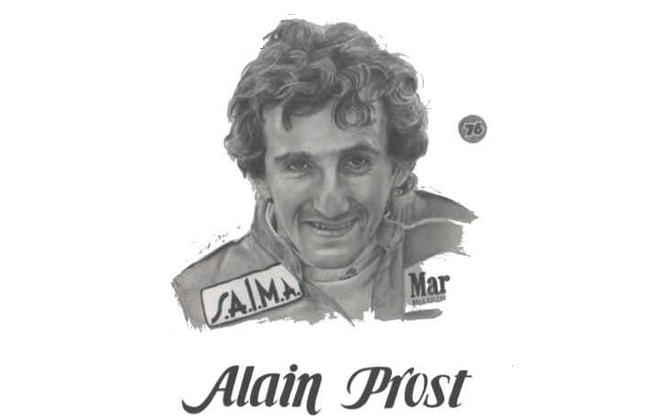 Alain Prost becomes the first Frenchman to be inducted into the International Motorsports Hall of Fame, and at the end of his splendid career, he had virtually re-written the Formula One record book. His 51 career wins, accomplished in 199 starts, is the most ever for any Formula One driver, and his 33 career poles ties him with Jim Clark for second place on the all-time list. Three times, the popular Frenchman won seven races in a single season.

His 14 year career, which began in 1980, culminated with his fourth Formula One title in 1993. Only the legendary Juan Fangio, with five, had more. In addition to his four titles, Prost was runner-up on four other occasions (1983, 1984, 1988 and 1990). He also earned more championship points (798.5), fastest laps (41) and podium finishes (106) than any other Formula One driver in history. Among his 51 wins were a record six victories in his home French Grand Prix.

Born in St. Chamond, France on February 24, 1955, the 5′-4″ Prost began his racing career in 1973 as the French and European Karting Champion, and won the Senior Karting title in1974. His competitive debut was in Formula Renault in 1976. He entered Formula One in 1980, driving a McLaren-Ford and finishing tied for 15th in the World Championship point standings. In 1981, driving for Renault, he jumped to fifth in points, and the following year, driving a Renault, he was fourth in points.

Prost won his first title in 1985, driving for McLaren, and repeated in 1986. His third title in five years, also with McLaren, came in 1989, but Prost went the next three years without a championship, and there were those who felt he might not win another.

In 1993, Prost silenced his detractors, proving that he had saved the best for last. Driving for Williams, he won his fourth title, claiming 13 poles along the way. During his career, in addition to Renault, McLaren and Williams, he also drove for Ferran.

When Prost retired at the end of the 1993 season, he spent two years as a TV reporter and did public relations for Renault. In 1996, Prost was a technical advisor for McLaren’s Formula One team. Finding that he wanted to be even more involved in Formula One racing, he bought the Ligier team and formed Team Prost Grand Prix. Powered by Peugeot engines, the team has headquarters in Guyancourt, near Paris.