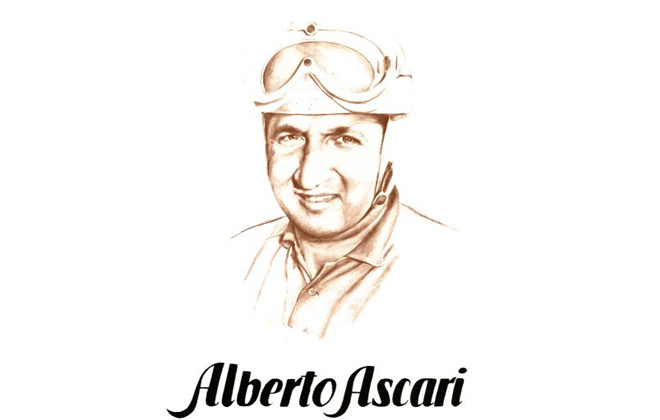 Alberto Ascari was born on July 13, 1918, the son of racing great Antonio Ascari. He was only seven years old when his father was killed in the French Grand Prix at the height of his racing career. Yet young Ascari retained vivid memories of his father and thus set on a racing career of his own.

It began four years later, when Ascari borrowed a neighbor’s motorcycle and “raced” around a previously quiet Italian piazza. By 1936, Ascari had left school, which he found boring, and with the help of his mother he acquired his first motorcycle.

He made his racing debut that same year but he failed to finish his first race. Just six days later, however, on a repaired, finely tuned motorcycle, he won at Lano. For the next three years, Ascari gained some renown as a motorcycle competitor, becoming a member of the Bianchi factory team. That led to his first race in 1940, when he drove for Enzo Ferrari in the Mille Miglia.

He took the lead in that race, but retired with a seized valve. He finished ninth later that year in the last Tripoli Grand Prix and raced in another event before World War II forced him to curtail his activities until 1947.

On Sept. 28,1947, his initial victory came in a Modena Sports Car in Maserati. In his first season of competition, Ascari, nicknamed Ciccio, won the San Remo Grand Prix, and the Pescara Sports Car race. He was runner up in the British Grand Prix.

In 1949, Ascari joined Ferrari’s factory team and won the Ban, Italian and Swiss Grands Prix. He also won the Silverstone International Trophy Race and several other events. By 1952, he had achieved his first World Championship with victories in the Belgium, French, British, German, Dutch and Italian Grands Prix.

It didn’t end there. Ascari was clearly the world’s top driver as, in 1952, he won a second consecutive World Championship with wins in the Argentine, Belgian, British, Dutch and Swiss Grands Prix. He then left Ferrari for Lancia, although he and Enzo remained friends.

With Lancia, Ascari won the Mille Miglia in 1954, a year before Lancia entered Grand Prix competition. In 1955, Ascari gave Lancia its first Grand Prix triumph in the Valentino Grand Prix. He quickly followed that with a victory in the Naples Grand Prix and then, in Monaco, he was about to take the lead on the 81st lap when his wheels locked and he was thrown into the harbor.

He emerged with only a broken arm, despite his 110 mph takeoff. But he was shaken and decided to curtail his activities. Back in Modena, he recovered and felt he needed a short, speedy drive to settle his nerves more and Ferrari was willing to oblige, providing him with a car for a few laps on the Autodrome on May 26, 1955. On his third lap on the high speed circuit, Ascari approached the third curve, now called the Ascari Curve, and braked. His wheels locked and the car flipped. He died in the ambulance on the way to the hospital.

He won 47 international races in 56 starts in nine years of racing. His two World Championships attest to his ranking as one of the greatest drivers in European history.