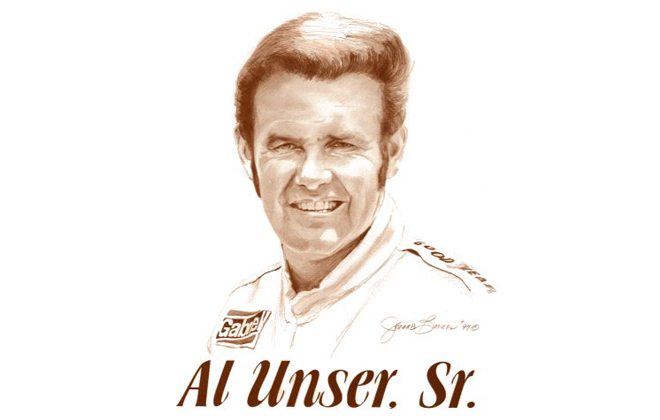 Alfred Unser, Sr., holds the distinction of being one of only three drivers who have won the Indianapolis 500 four times. He is also in elite company as one of three Indy drivers who have won on paved ovals, road courses and dirt tracks in a single season, having done it three times in a row (1968-69-70).

The youngest brother from the famous racing Unser family of Albuquerque, NM, Al Unser posted 39 wins, grabbed 27 poles and won well over $6 million on the Indy car circuit before he retired in 1992.

He first drove Modified roadsters in 1957 in Albuquerque at the age of 18. He also raced the Pike’s Peak Hillcllmb for the first time in 1960, finishing second to his brother, Bobby.

Unser made his Indy car debut at Milwaukee in 1964, and later that year won the Pikes Peak Hillclimb halting his brother’s six-year win streak. He also raced in sprints and midgets. The next year he ran Indy for the first time, finishing 9th after starting on the last row. He also won his first “champ car” win at Pikes Peak.

In 1967, Unser finished second to A.J. Foyt at Indy, and also claimed his first pole, at Langhorne. He also raced USAC stocks and was named Rookie of the Year Unser really established himself in 1968, winning five races in a row, and grabbing five poles. A broken leg kept him out of Indy in 1969, but he won five times in 19 starts.

Unser earned the first of his three Indy car championships in 1970, beating brother Bobby. Unser won 10 races, including the Indy 500 from the pole, and seven other poles that year.  He was also named DRIVER OF THE YEAR.

After five wins, including a repeat win at Indy in 1971, Unser experienced a dry spell, going four years with only a win at Texas in 1973. He turned things around in 1977, however, winning at Pocono, Milwaukee and Phoenix. In 1977, he moved to second in Indy-car points and won the IROC championship.  Unser swept the “Triple Crown” events of Indy, Pocono and Ontario in 1978, and also repeated his IROC championship.

Joining Penske racing in 1983, Unser posted 10 Top-Five finishes and claimed his second PPG championship. Two years later, he won his third title, by one point over his son, Al Jr. At 46, he became the oldest Indycar champion.

In 1987, replacing the injured Danny Ongias in a year-old March/Cosworth, Unser won his fourth Indianapolis 500.