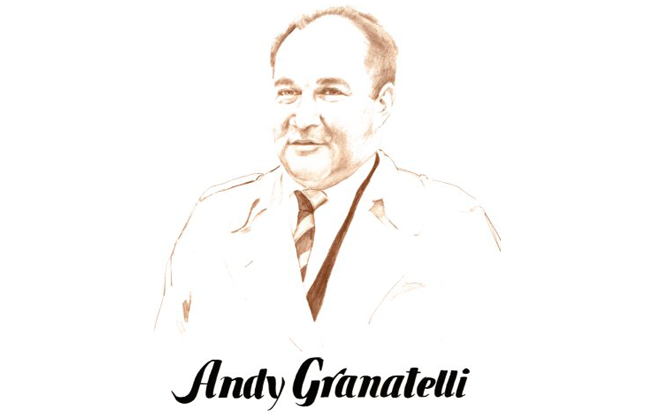 It’s hard to know where to start with Andy Granatelli. He combined business acumen and salesmanship to produce so many varied careers, some of which seem downright unbelievable, that each one would stand as a Horatio Alger epic in its own right.

In 1948, he passed his driver’s test at Indy using his good friend Bill France, Sr.’s helmet. Soon thereafter, he was Vice Chairman of NASCAR. He was President of the “Hurricane Racing Association, Inc’.’ and also promoted hot rod and stock car races throughout the Midwest with the biggest quarter mile crowds ever, 89,560 people at Soldiers’ Field in Chicago. As Chief Driver and Engineer at Studebaker Racing, he set over 400 world land speed records. At the age of 62 in his street legal passenger car, he drove to an amazing record of 241.731 mph on pump gasoline. He took the immortal Novi racing engine and increased the horsepower from 450 to 837. He also designed the Chrysler 300 engine, the Cadillac Eldorado engine and the Studebaker Avanti, R I, II,III and IV engines. He was responsible for starting March Works, which is a Formula land II car constructor. He designed, built and raced the world famous Indianapolis turbine engine cars in 1967 and 1968, and his race cars have won the Indianapolis 500 twice. His business accomplishments are still buzzed about in financial circles. He took an unknown company called Chemical Compounds, changed it’s name to STP, and in nine years it zoomed from seven to over 2,000 employees. He made STP a household word.

Granatelli went to Indianapolis with the Turbine car with Parnelli Jones as his driver. Jones led 197 laps of the 200-lap race until a gear bearing failed. Afterward, USAC banned the car.

In 1969, Granatelli teamed up with Mario Andretti to win his first Indianapolis 500. He won it again in 1973 with Gordon Johncock as his driver. Granatelli brought STP sponsorship to Petty Enterprises and Richard Petty, who of course, won immediately and often. That relationship, the STP-Petty union, one of the longest associations in all of motorsports.

A racer, a car owner, designer, businessman, promotional genius, an automotive expert, Granatelli proved to be all of these things. His face isn’t seen at the tracks any more, but he is still a successful business entrepreneur in California. Really, though, one doesn’t have to see to know him.   Just look around. Soon you’ll see the letters, “STP’.’ And they will always call him “Mr. 500.”