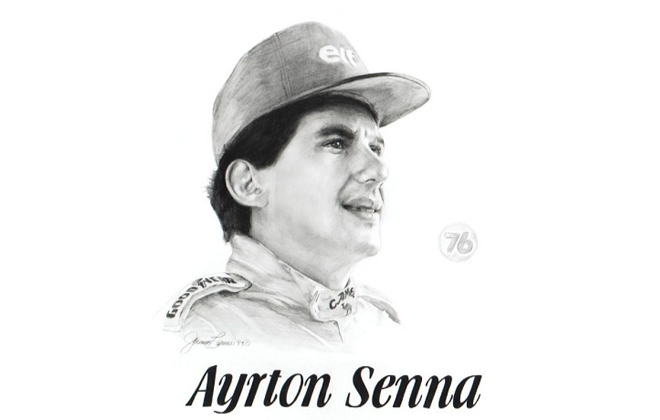 Ayrton Senna da Silva was born on March 21, 1960, to a wealthy family in Sao Paulo, Brazil. His father, Milton, was a factory owner and landowner and his mother Neide Senna da Silva was the granddaughter of Italian immigrants. The couple already had a daughter, Viviane, and soon after Ayrton’s birth, they welcomed another son, Leonardo.

Senna took a liking to sports at an early age, excelling in gymnastics and a few other sports. However, he suffered poor coordination and motor function. He took a special liking to cars around the age of 4 and by 7 was driving a Jeep around his family’s farm and changing gears without using a clutch.

His first experience in racing came around the age of 13, racing go-karts in his home country of Brazil. He started his first race in pole position and led most of the race before colliding with an opponent. He went on to win the South American Kart Championship in 1977. He competed in the Karting World Championship every year from 1978 to 1982 and finished in second place in 1979 and 1980.

In 1981, Senna moved to England to begin sing-seat racing with the Van Diemen team. He won the RAC and the Townsend Thoresen Formula Ford 1600 Championships in his first year in England. Despite his success in racing, Senna felt pressure to join the family business back in Brazil. He announced his retirement and headed home to his family. However, this did not last long. Before he left England, Senna was offered to drive with the Formula Ford 2000 team. Senna took this offer and moved back to England, officially adopting his mother’s surname, as his father’s, da Silva, is one of the most common in Brazil.

Upon his return to racing, Senna won the 1982 British and European Formula Ford 2000 championships. In 1983, Senna raced in the British Formula Three Championship and won the championship in a closely-contested race. In 1984, Senna began racing with Toleman where he finished ninth in the Drivers’ Championship.

In 1988, he joined the McLaren team due to his relationships established with Honda. Over the next six years, Senna would dominate Formula-1 in McLaren-powered Hondas, beginning with eight wins that year, including his first world title, and 13 pole positions. Both of these stats shattered previous records.

During this six-year domination, Senna recorded 37 of his 41 career wins and 46 of 65 poles. In 1991, he became the youngest ever three-time world champion.

In 1994, Senna joined the Williams team under a reported deal that gave him a $20 million salary. This season marked the beginning of sweeping rule changes in racing, most notably the ban of “driver aids” like active suspension and anti-lock brakes.

The 1994 San Marno was scheduled for April 28- May 1 in Imola, Italy. It was traditionally considered to be the beginning of the annual competition. At the start of the race, Senna maintained his first place position, and on lap 6, Senna completed the third-fastest lap of the race.

Rounding the corner on lap 7, Senna’s car left the track at around 191 mph, ran a straight line off the track, and hit a retaining wall at approximately 145 mph. Senna was extracted from the car within two minutes, and car-side aid began being administered. However, Senna’s temporal artery had ruptured and he had lost about 90% of his blood volume. He was airlifted to Bologna’s Maggiore Hospital, but it was too late. Senna passed away from his injuries. He was 34.

Senna’s legacy lives on today-many safety features were enacted following his crash, such as improved crash barriers and redesigned tracks. His sister Viviane established the Instituto Ayrton Senna in his native Brazil. Through partnerships with schools, the institution helps create opportunities for children in underprivileged areas.

Senna was inducted into the International Motorsports Hall of Fame in 2000. His success has been attributed to his obsessive desire to win, his attention to detail, and his analytical mind.