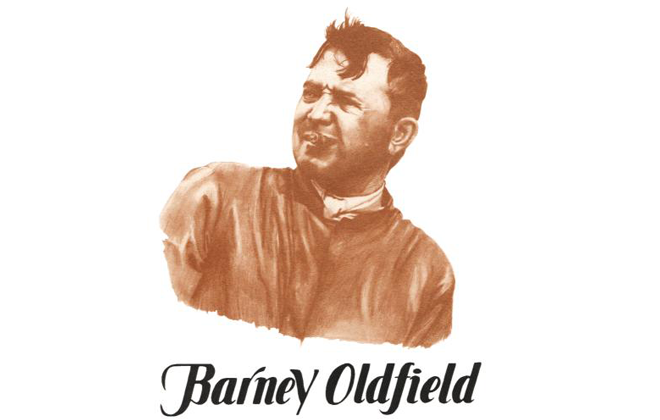 Bern Eli Oldfield didn’t mind that so much of his racing career was fact entangled with fiction. The consummate showman and master self-promoter was pleased. It suit his robust, outgoing personality and style.

But one thing is certain: Barney Oldfield was one of the greatest, if not the greatest, race drivers of all time. His name is so meshed with racing that even those who don’t follow the sport recognize it.

He was born June 3, 1878 in Wauseon, Ohio. His first love was bicycling and by 1894 he had won silver medals and a gold watch from bike races. In 1896, he was being paid handsomely by the Stearns bicycle factory to race on its amateur team. Six years later, a man lent him a gasoline-powered bicycle to race in salt Lake City, where Oldfield had emigrated.

This association led to a meeting with Henry Ford, who had prepared two race cars in 1902. Oldfield was asked if he would like to drive one and he agreed, heading East on his own money. When he got to Grosse Point, Mich., to test the cars, neither would start. Ford sold both to Oldfield and Tom Cooper, his partner, for $800.

After much work, the car – “No.999” – was driven for the first time in the Manufacturer’s Challenge Cup, where Oldfield beat defending champion Mexander Winton by a half mile. It was Oldfield’s first-ever experience in auto racing.

On Memorial Day in 1903 in New York, Oldfield drove a mile in a minute flat in another match-race victory. Two months later, he powered the car to a mile run in 0:55.8 and that was enough for Winton to hire Oldfield, complete with salary, expenses and free cars.

Oldfield’s career then spiraled upward. He criss-crossed the country in a series of match races and speed runs. In one year, driving for Peerless, lie competed on 20 different tracks in 18 weeks. He made four exhibition runs and won 16 straight match races.

His showmanship came to the forefront. Oldfield delighted fair-goers with interminable record-breaking. He even appeared on stage in a play about racing in which he portrayed a poor mechanic who saves the day.

In 1910, Oldfield bought a Benz with which he broke all existing speed records for the mile, two miles and the kilometer in special runs at Ormond Beach, Fla. After that, he was able to charge a whopping $4,000 for personal appearances, something he didn’t mind at all.

Once suspended by the American Automobile Association, the sanctioning body of the day, because of his “outlaw” racing activities, much of Oldfield’s legitimate racing career was lost during his prime. However, he competed at Indianapolis after being reinstated and his best finishes were fifth in 1914 and 1916. Additionally, he ran the first 100 miles per hour lap in Indianapolis history.

But speed records, match races and exhibitions made up most of Oldfield’s career. The cigar-chomping speed merchant was such a star he was in almost constant demand. He knew how to make use of his position, as well. He helped put Firestone on the map with the Oldfield Tire, which became the cornerstone of the company’s racing division.

He retired in 1918. But he didn’t drop out of sight. He toured, made movies and tended to racing business. His legacy was such that even today, his name conjures up the image of a fearless, brash individual who is the absolute master of speed.