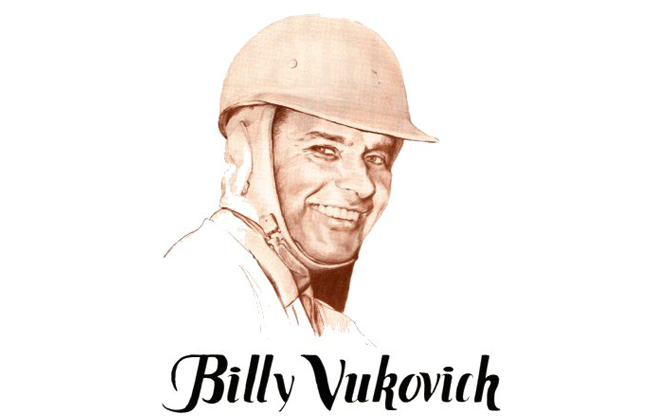 Bill Vukovich came out of of California’s Midget circuit to become one of the greatest drivers to ever compete on the massive Indianapolis Motor Speedway.

He won the race twice in a row and lost his life trying to become the only man to win it three times in succession. Beyond that, he won countless Midget races, barnstorming the country.

Vukovich’s father died when Vukovich was 13 years old. The family farm, located near Fresno, Calif., was lost and that meant Vukovich and his brother Eli had to go to work to help make ends meet. They did anything they could during the hard years of the Depression – farming, truck driving – and took turns paying for the groceries.

At 18, Vukovich drove in his first race. He came in second in a Chevrolet-powered Modified. The third time out, he won. His car owner, Fred Gearhart, let him keep all the winnings and on a good week, Vukovich could clear $15.

In 1938, Gearhart steered Vukovich to Midgets and in his first race, he crashed, breaking his collar bone and several ribs. Seven weeks later, he was back at it.

Brother Eli joined him and for two years, they competed together, traversing the countryside. They drove as many as 15 to 20 heats and races per week, often sleeping in their truck. For good races, they would clear $50; on bad ones, nothing.

After World War II, Vukovich wanted his own Midget and bought one from Gearhart. He painted it bright red and called it “Old Ironsides.” He scarred his hands, broke shoulders and ribs and suffered many concussions – but he was the terror of the Midget circuit. He simply couldn’t bear to lose and he didn’t very often.

Vukovich was the West Coast Midget champion in 1946 and the National champion in 1950. By that year, Midget shows were drying up so he headed for Indianapolis, where he got into Wilbur Shaw’s Maserati – which had won the 500 in 1939 and ’40- to take his driver’s test. He passed, but the car couldn’t qualify for the race.

He returned to Indy in 1951 and lasted 29 laps. However he was so impressive in the race he was hired by car owner Howard Keck to replace the retiring Mauri Rose.

In 1952, Vukovich qualified second at Indy and led from the 32nd lap until a mixup in the pits cost him the race. However, he felt he had Indy licked. In the sweltering heat of the 1953 race, Vukovich won easily, leading 195 of the race’s 200 laps.

The next year, he won again, this time with a then-record average speed of 134.85 miles per hour. With his share of the prize money, he bought two Fresno gas stations and invested soundly. He wanted only the best for his family. He remembered far too well the harshness of his youth.

In 1955, Keck got out of racing and released Vukovich to Lindsay Hopkins. It was in Hopkins’ car that Vukovich was involved in the fateful, fiery accident on the 55th lap which cost him his life. He was only 36. He never scored his Indy hat trick, but no one ever had to pass the hat for his family.

And no one could ever doubt the greatest of a Midget driver who went on to conquer Indianapolis in ways few men ever did.