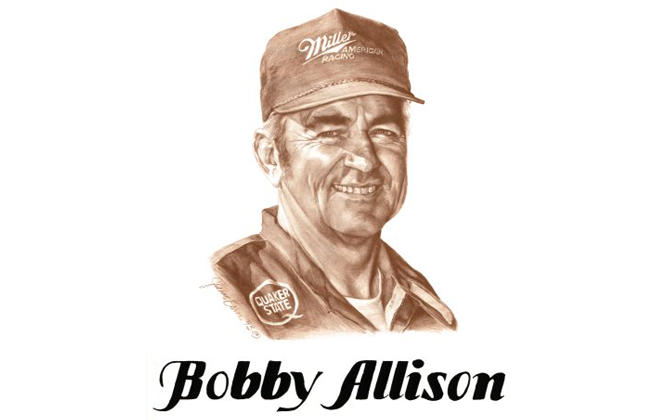 Bobby Allison was born on December 3, 1937, in Miami, Florida, the 4th of 10 children. While a senior in High School, Bobby had his own car, and after some discussion with his parents he was allowed to enter his car in competition. In that first race he finished 10th out of 55 cars. His young racing career was brought to a temporary end by his father when he flipped his car twice.

After graduation from High School, Allison was employed testing engines at Mercury Outboard, which involved running boats at high speeds. During that time he learned that preventive maintenance was as important to winning as a fast car, and that racing was a business. From boat engine testing and NASCAR Grand National mechanic work, Allison spent two years as a garage owner, and then decided to drive race cars again.

While he lived at home, Allison drove under the assumed name of Bob Sunderman until his parents found out. Then, claiming to be an older age, he began running the NASCAR Sportsman circuit as probably one of the youngest 21 year olds in racing history. His first major victory came on June 1, 1959, in Montgomery, Al.

Allison raced modified stock cars, honing his driving skills in the tough Alabama modified-sportsman circuit. He won his first national NASCAR “Modified Special Crown” in 1962, won it again in 1963, and in 1964 be won NASCAR’s Modified Crown.

Allison raced on the Grand National circuit, the SCCA’s TransAm series, and in 1973 raced in the Indianapolis 500. He was one of the first to campaign an independent Chevrolet Chevelle against the factory teams.