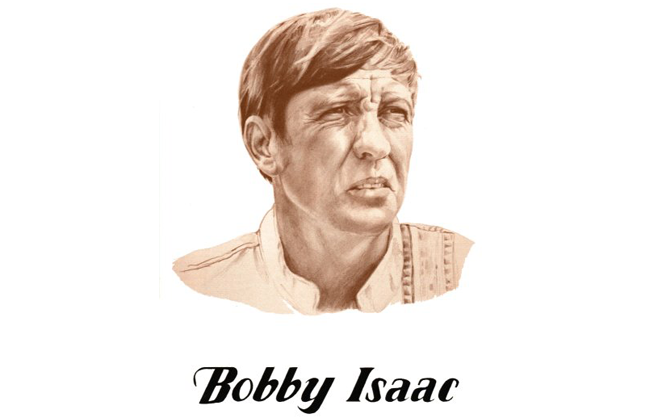 Bobby Isaac drove Smokey Yunick’s Chevrolet in the 1963 National 400 at Charlotte, giving it a whale of a ride before a tire blew. Afterwards, Yunick said of Isaac; “He’s a race driver. I know that.”

Yunick’s endorsement impressed Ray Nichels, and he put Isaac in his Dodge for the 1964 season, and the young driver was on his way to greatness. Isaac’s name would be associated with Dodges during his stellar career.

Isaac drove Nord Krauskopf’s K&K Insurance Dodge to the Winston Cup title in 1970. He won 11 races, and his car accounted for nearly 54 percent of the total points which earned Dodge the manufacturers championship, breaking a seven-year stranglehold by Ford.

Isaac, Krauskopf and legendary crew chief Harry Hyde, decided to cap the season by going to Talladega Superspeedway, the worlds fastest track, to try for a closed-course record. On a raw, blustery day (November 24, 1970), Isaac circled the track at 201.104 mph to trump Buddy Baker’s old record of 200.447 mph.

Isaac felt that this was the pinnacle of his career. Yet, in September 1971, he went on to set 28 world class records on the Bonneville Salt Flats in his Dodge. Many of his records still exist to this day.

Bobby Isaac was born in 1932, a kid in a large North Carolina family. At 12 he went to work in a sawmill where he saved his money until he had enough to buy a pair of new shoes.

Isaac tired of working at the sawmill, and that’s when he decided that he wanted to make a living driving race cars.

And eventually Bobby Isaac did, winning 37 NASCAR Winston Cup events. Isaac could now buy all the shoes he ever wanted.