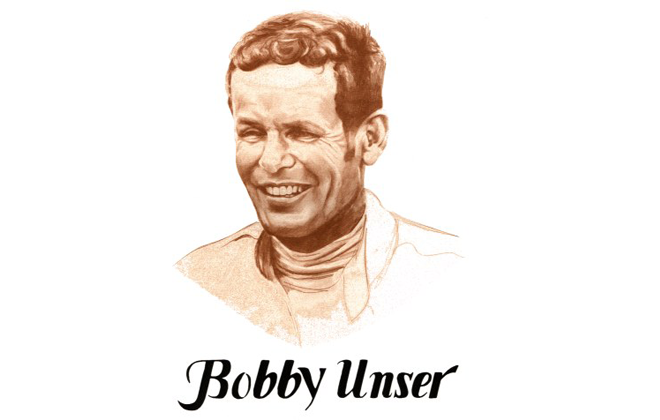 Among the racing heavens that is the celebrated Unser family, Bobby’s star shines bright.

He was the undisputed king of the Pikes Peak hillclimb, winning the championship 13 times. At Indianapolis, he was a winner three times, in 1968, 1975 and again in 1981. He has 35 career Indy Car wins and was the first to go 190 miles per hour at Indianapolis.

Born Feb. 20,1934, Unser started by driving modified stocks around his Albuquerque, N.M., home. He won the state’s title at age 15 and repeated at age 17. By 1956, he was a champion of the Pikes Peak hillclimb and starting in 1958, he put together a string of six consecutive titles. He was to continue to dominate for years.

An accomplished Sprint Car driver – another form of racing he pursued successfully for years – Unser’s Indy Car career began in 1962. He spent three years driving Novi-engined cars for Andy Granatelli before switching to Bob Willke’s team for a four-year period from 1966-70.

In 1968, Unser staged a spirited battle with Joe Leonard, now behind the wheel of Granatelli’s turbine car, to win his first Indianapolis 500. He was the leader for much of the race, until the 400-mile mark. He was resigned to second place with just 10 laps to go because he was being blocked by Art Pollard, teammate to leader Leonard. But suddenly Leonard’s engine gave out and Unser scored the victory, something that had, to that time, eluded his father, his uncles and his brothers.

That year, Unser also earned his first USAC National Championship. He was to win it again in 1974, one year before he won his second Indianapolis 500. That year, he won in a Jorgensen Fagle. Six years later, he won again in Roger Penske’s Norton Spirit, but not without a fair amount of controversy.

He won the pole that year and was the dominant driver, battling for the lead with Patrick Racing teammates Mario Andretti and Gordon Johncock. Three-quarters of the way through the race, Unser pitted along with Andretti, was out first and passed a group of cars behind the pace car en route to his rightful position in line.

He went on to win by eight seconds over Andretti.

But the United States Auto Club, which sanctioned the race, took exception, claiming Unser had illegally passed under caution conditions. It penalized him a lap and thus, gave the win to Andretti. However, Unser followed up with a summer-long session of appeals and debate and was reinstated as the winner of the Indianapolis 500, his 35th and last in Indy Cars.

He retired the following year but continued to keep his hand in Indy Cars and at Pikes Peak – which he won again in 1986. Today, he serves as a television commentator, helping to bring racing to the forefront of the nation.