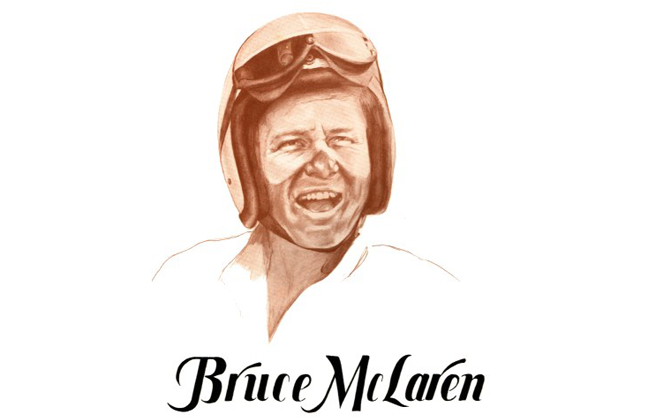 Like many other racing greats, Bruce McLaren was more than just talented – he was versatile.

Although he never ruled as Formula One’s World Champion, that did not diminish his greatness one bit. He was a designer and manufacturer of racing machinery, a champion driver in the sports/racing field, a winner of Grand Prix events, and one of the most popular competitors to wear helmets.

Born in Auckland, New Zealand, he contracted a disease at age 9, leaving his left leg a couple of inches shorter than the right. He spent almost three years in hospitals, two of them in traction. But at age 14, his father bought him his first car, and young McLaren entered his first competitive event – a hill climb – in 1952. He won second in his class.

In 1954, McLaren took part in his first real race and finished out of the money. But he wasn’t discouraged. He acquired a Formula 2 Cooper-Climax and was the runner-up in the New Zealand championship series in 1957-58.

Bruce McLaren went to work for Cooper and thus began a relationship that would last for more than seven years. McLaren began competing in Formula 2 and soon thereafter was in the German Grand Prix, where Formula 2 and Formula One cars competed together. He was the first F2 car home and finished fifth overall.

In 1958, McLaren became Cooper’s Formula One driver. He won the United States Grand Prix that year and, at 22, became the youngest ever to win a GP event. He continued to race with Cooper and, in 1962, he won at Monaco. During this same time, he sped up his Sports Car activities, winning a three-hour race at Sebring.

In 1963 came the founding of Bruce McLaren Motor Racing Ltd., although McLaren continued to race for Cooper through 1965, winning the New Zealand GP in that year.

McLaren Motor Racing began with a car purchased from Roger Penske and powered by an Oldsmobile engine. In 1964, it won in its first outing at Mosport. It started an era, even though McLaren was competing in other people’s cars as well.

His Own Formula One GP Racing Team

By 1965, Bruce McLaren severed all other relationships and announced his own Grand Prix racing team. He won his first GP race since 1962 at Spa in 1968 and his co-driver, Dennis Hulme, won twice that same year in the McLaren-Ford. It was in Sports Car racing where McLaren’s efforts shined. In 1966, the Can-Am Series began to develop, and McLaren’s cars finished second twice and third twice in six races. The next year, they won five of six, and in 1968, four of six. Remarkably, in 1969, McLaren Racing won 11 of 11 races. McLaren won some and Hulme won others. Once, with Dan Gurney in a third car, the trio finished 1-2-3.

In 1970, Bruce McLaren made the last of his Formula One races, making his 100th start at Monaco that year. On June 2, he was at Goodwood by himself, testing his newest Can-Am challenger, the M8D. The car’s rear section broke away at speed, forcing the car to hit an earthen bank. Bruce McLaren died from his injuries.

His achievements, especially his contributions to the development of motorsports technology, will never die.