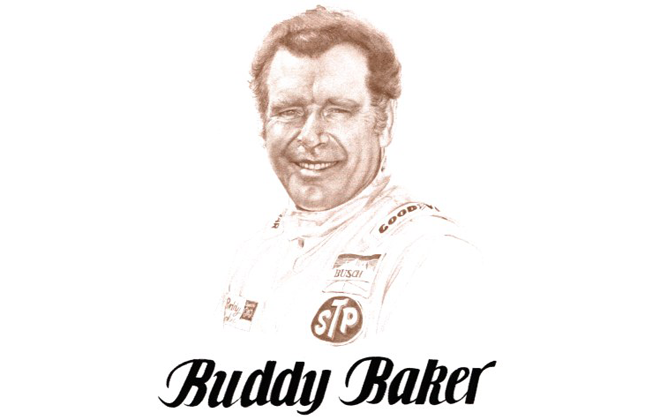 Wylie (Buddy) Baker, Jr., born January 25,1941, in Florence, South Carolina, was known as the “Gentle Giant” of NASCAR Winston Cup racing. He was not so gentle, but certainly a giant, on March 24,1970, while testing his blue Dodge Daytona for the first running of the Alabama 500 at the Talladega Superspeedway. On this day, Buddy set a world closed-course record that would never be forgotten by turning a 200.447 mph lap around the immense 2.66 mile high-banked track. He was the first driver to exceed 200 mph on a closed course.

When Buddy reached high school he participated in sports, but always wanted to race. He ran his first race in 1958 at the age of 17. Although still a teenager for his first race, Buddy was not in any hurry to make his impact on the racing circuit. He did a tremendous amount of tire testing and learning, trying to corner and set up like his father, Buck Baker. Carefully studying the moves of his heros, his dad and Glenn “Fireball” Roberts, he desired to emulate their styles and achieve their status.

Following one’s father in a profession as competitive as NASCAR Winston Cup racing can be either difficult or fortunate. Buddy made the most of it by charging to the front of many races. His first ride was in the now defunct convertible division at Columbia, South Carolina. He got his first win in NASCAR Winston Cup and moved into the top echelon of drivers in 1967 by winning the National 500 at Charlotte Motor Speedway.

In the long run, studying and charging paid off for Buddy. In his career, NASCAR credits Buddy with 688 Winston Cup races. He won 19, finished in the top five 198 times, and the top ten 299 times and won 40 pole positions. He also won over $3.6 million.

On February, 17, 1980, Buddy won the prestigious Daytona 500 from the pole position and set a new race record of 177.602 mph. This was the first 500 mile race ever run at Daytona in under three hours, and is a Daytona Speedway record which still stands.