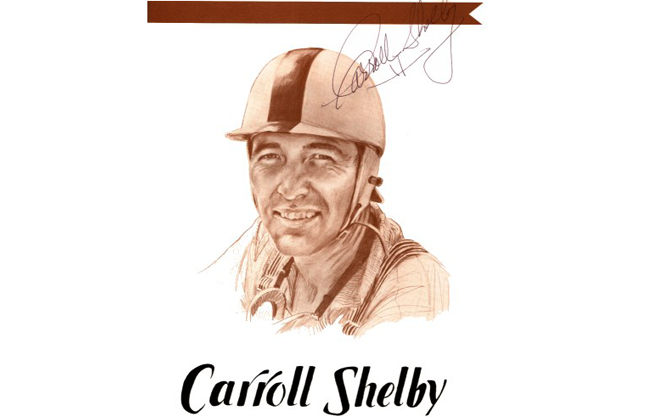 Carroll Hall Shelby left his legacy in the automotive industry as an entrepreneur and designer. Shelby is best known for his involvement with the AC Cobra in the creation and modifications of the popular Ford Mustang. There is no doubting his motorsport achievements and versatility.

Born in 1923 in Leesburg, Texas, the son of a mail clerk, he developed a love of cars at a young age. At 15, he was driving and maintaining his dad’s two-door Ford sedan.

Shelby joined the Army Corps after graduating high school. He never entered combat during World War II as it was a common practice to keep the best pilots in the U.S. to train the others. It’s noted that his favorite aircraft was the B-26 bomber, because it was faster than any of the Japanese, Italian or German-produced planes. This need for speed would be a constant in Shelby’s life long after the war.

After the war, Shelby married Jeanne Fields in December 1943 and the couple had three children. His first business venture was raising chickens, but he soon realized his true passion was in the automobile industry.

As a driver, Shelby’s first win came in 1952 in a MG-TC and it wasn’t long until he was driving Ferraris and Maseratis, winning 12 races in just two years. His first win in Europe came in the Monza 1000, but the pinnacle of Shelby’s racing career came in 1959 when he won the 24 Hours of Les Mans driving an Aston Martin.

Shelby joined the Aston Martin factory team in 1954, and in 1957 he finished first in 19 straight races on his way to winning his second SCCA championship and being named Sports Illustrated’s “Driver of the Year.” A heart issue forced him to retire in 1960 and he turned his attention to developing an American sports car. Shelby was impressed with the speed of the Ferraris, Jaguars and Maseratis of the day, but their bulky engines were high maintenance and  unreliable. He joined forces with AC Ltd., an independent car manufacturer in England, and using a lightweight Ford engine created what would be known as the Ford Cobra. Shelby’s vision of an American sports car had become a reality.

On July 4, 1965, the Cobra won the World Manufacturer’s GT Cup, accomplishing Shelby’s goal of beating Ferrari. He’s the only American manufacturer to win the championship, before or since. The Cobra became a successful-selling vehicle for Ford dealers nationwide.

In 1962, Shelby created Shelby American, a California-based company to build his cars.

Introduced in 1964, the Ford Mustang quickly became a successful-selling vehicle. However, Lee Iacocca, Ford Division General Manager, was concerned that the early-model Mustang lacked a performance image and didn’t fit well within the Ford Division Total Performance Marketing program. Iacocca called Shelby and asked him to transform the Mustang into a sports car that would fit within the program. The result was the 1965 Shelby Mustang GT350 which was produced from 1965-1970. The GT 500, with an enlarged V-8 engine, was added to the lineup in 1967 and was produced until 1970.

Ford Motor Company assumed production of the Shelby automobiles in 1968, and Carroll Shelby retired from the automobile and racing business shortly after that in 1970. But Shelby was not one to merely just sit around after retirement. His retired life continued on with the same color and vibrancy as he had lived previously.

In “retirement”, through his relationship with Goodyear, Shelby became a provider for top-quality racing tires. That led to the founding of the Shelby Wheel Company which produced a wide array of performance wheels for a variety of vehicles.  He also raised Kobe beef cattle, developed a chili company that he eventually sold to Kraft in 1986 and spent time with his grandchildren.

Shelby always remained close to the automobile industry and in 1982 collaborated with Lee Iacocca at Chrysler to create performance cars based on Dodge models which led to the prototype Dodge Shelby Chargers being built. In 1987, more conversations with Chrysler would lead to the creation of the Dodge Viper RT/10.

In 1990, Shelby underwent a heart transplant. In 1991, the same year he was inducted into the International Motorsports Hall of Fame, he founded the Shelby Heart Fund. The charity was eventually named the Carroll Shelby Foundation. In 1995, Shelby helped produce the CSX4000 Series 427 Cobra SC Roadster with $350K of the $500K selling price going to the foundation.

Shelby founded the Shelby Heart Fund in September 1991, the same year he was inducted into the International Motorsports Hall of Fame. He contracted with several manufacturers over the years to produce Cobras with donations to his charity. In 1995, Shelby started production of the CSX4000 Series 427 Cobra S/C Roadster, with $350,000 of each $500,000 car going to his charity, eventually renamed the Carroll Shelby Foundation.

In 2003, Shelby returned to his roots, Ford Motor Company, with the unveiling of the Ford Shelby Cobra Concept Card at the Detroit Auto Show. He would go on to help Ford produce many more models of the famed Cobra and Shelby Mustang GT, including the Ford Shelby GT convertible in 2007. In 2012, in New York, on the 50th anniversary at the New York Auto Show, Shelby debuted the Shelby 1000.

Carroll Shelby died  on May 11, 2012 at Baylor Hospital. He was 89. His legacy on the American automobile and racing industries lives on through Shelby American, now headquartered in Las Vegas. It’s more than just a manufacturing facility, it’s become a destination, with a heritage center and car collection that makes the trip well worthwhile.

The International Motorsports Hall of Fame is home to a piece of Shelby Cobra history. Legend has it that a friend of Shelby’s suggested he build a “fat man Cobra replica.” He reasoned that many of the men with the money to buy a Cobra couldn’t fit in one comfortably. The car never made it to production, but the plug for the mold sits in the IMHOF Museum.