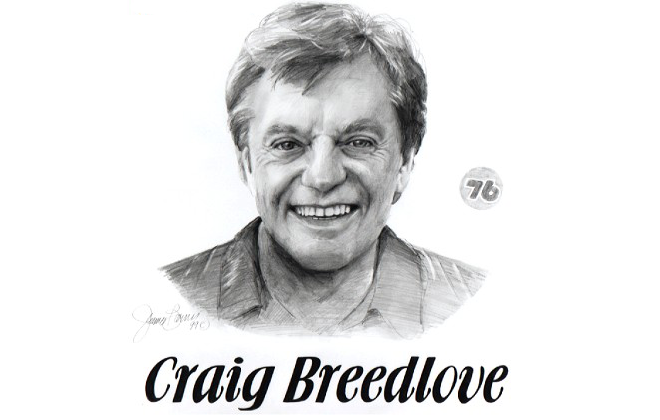 Craig Breedlove bought his first car at the age of 13. When he became legally able three years later, he got his 1934 Ford Hot Rod Coupe up to a remarkable 154 miles per hour. He later drove a supercharged “belly tank” streamliner 236 mph on Utah’ 5 Bonneville Salt Flats.

In 1959, he paid $500 for a military surplus J-47 engine and began building his first “Spirit of America”. Breedlove clocked a record run of 407 mph in this car at Bonneville in 1963 to return the world land speed record to America after more than three decades.

The next year Art Arfons and his Green Monster gave Breedlove some serious competition. The two men traded the record back and forth for three years. In 1965, Breedlove put an end to that by setting a new World Land Speed Record.

The record of 600.601 made Breedlove the first man to break the 400, 500 and 600 mph barriers on land. Britain’s Andy Green has held the current record of 763 since October of 1997. Breedlove plans to reclaim the record soon with a run of 800 miles per hour that would far exceed the minimum 771 mph run needed to break Green’s existing mark.

For Breedlove, the sensation of such speed is incredible.  “I’m sitting six inches off of the ground, going faster than a bullet,” said Breedlove. “It is quite a rush.”