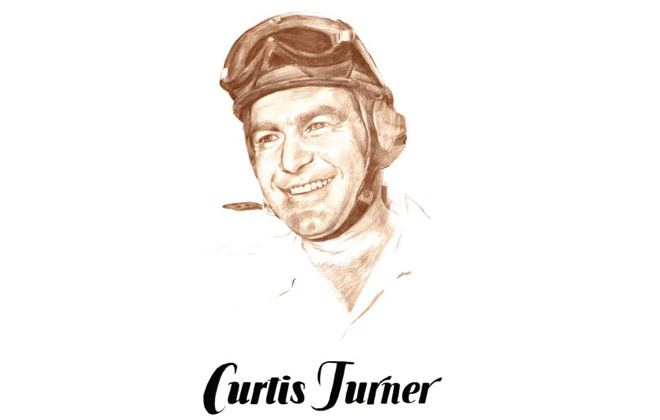 Curtis Turner was one of the pioneers of NASCAR stock car racing, a member of that hale and hearty band of competitors who raced hard, lived hard and enjoyed every moment of it.

He never let racing interfere with parties and fun. In fact, there were times when he went from one of his marathon parties straight to the race track. If a lack of sleep affected his driving perception, it was not evident. He was a remarkable man but, understandably, he wasn’t as remarkable as the legend which grew around him.

Turner was born on April 12, 1924 in Floyd, VA. He learned two things quickly: the lumber business and driving an automobile. He was raised in the era of booting whiskey so, naturally, he became part of the lore. There is no proof he drove the modified Fords which hauled “moonshine” because his name never appeared on the police blotter. But the many legends about his expertise in the field undoubtedly have some basis in fact. Once he lined up eight full bottles of liquor on the roadway in a double row barely wider than the Cadillac with which he proposed to execute a tail sliding 180 degree turn to slide backwards between the bottles. He performed the maneuver, then got out and drawled, “It was easy. I couldn’t waste all the good liquor.

Turner began “real” racing in 1946 at a small track in Mount Airy, NC, finishing last in a field of 18 cars. But he won his second race and began to build a reputation as perhaps the best dirt track driver of them all.

Turner raced almost from the inception of NASCAR. He was a star of Oldsmobile from 1950 through 1954, when he switched to Ford. He was originally billed as the Blond Blizzard from Virginia but he quickly picked up the nickname Pops for the way he routinely popped competitors off the track with great abandon.

He won 22 races in NASCAR’s old convertible division in 1956 and added 17 and the Southern 500 in the Grand National division for good measure. With his free for all style, Turner won 360 races, in NASCAR and out. Perhaps, though, one of his most memorable races was one he didn’t win. In the Rebel 300 at Darlington, SC. Turner and Fred Lorenzen started the last lap fender to fender. What had started out as fender banging evolved into a minor demolition derby around the 1-3/8th mile track. Lorenzen got in the last bash and won the race but on the extra “cool down” lap, Turner plowed into Lorenzen, smashing the front end of his own car to bits. He walked back to the pits.

Away from the track, Turner added to his Bunyanesque reputation. He made and lost and remade fortunes buying and selling timberlands. In 1960, he conceived Charlotte Motor Speedway and somehow, with hardly enough money to pay for the property, he got it built only to lose it soon afterward.

After a view from the business side, he was convinced the drivers were getting a shabby deal from NASCAR. He attempted to organize the drivers as a local of the Teamsters Union, which failed utterly and caused him to be banished from NASCAR for life. But, by 1965, NASCAR President Bill France Sr. rescinded the banishment.

Turner made his return to competition in the American 500 at North Carolina Motor Speedway in Rockingham, NC. Despite a broken rib, Turner started fourth in a Ford owned by Glen Wood. He was a contender from the beginning. He fought off drivers whose fathers had once been his rivals. Finally it was between Turner and the idol of the young, Cale Yarborough. Lap after lap, Turner held off every Yarborough probe and went on to score his most lucrative victory. His great driving talent never left him.

Turner came back to win the Permatex 300 in a Late Model Sportsman car at Daytona Beach, FL, the following year. Then he and Smokey Yunick collaborated on a Chevelle. But Turner crashed heavily in Atlanta and Yunick withdrew, saying, “I will not build the car that Curtis Turner was killed in.”

After that, Turner raced infrequently, coming out of retirement when the price was right. He had intended to come out for the National 500 at Charlotte in 1970 when his plane crashed against a mountainside near Punxsutawney, PA, on October 4, killing him and a passenger, golf professional Clarence King.

Turner’s passing marked the end of an era in automobile racing, for today’s professional is committed to the proposition that driving race cars requires complete dedication, with which parties cannot interfere. Turner was a different breed and his success earned him his lofty perch in motorsports history.