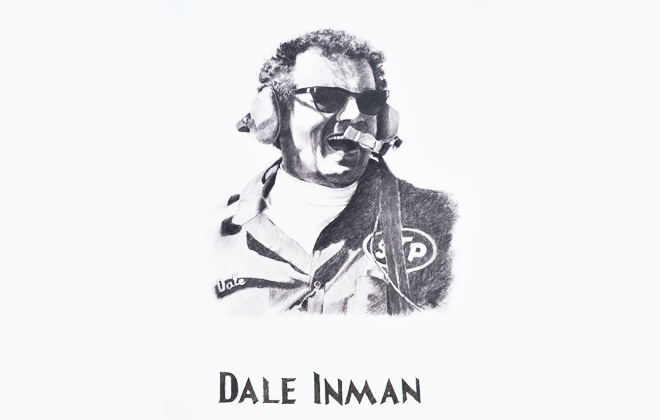 Dale Inman is undoubtedly the most successful crew chief in the history of NASCAR, with a record eight Cup Series Championships and 193 wins, including an untouchable seven Daytona 500 victories. Of those championships, seven of them were with his cousin Richard Petty in the famed No. 43. A master strategist on pit road and an innovator in the garage,  Dale Inman was a game-changer in NASCAR.

Dale grew up in Level Cross, North Carolina. He spent his free time helping out his Uncle Lee Petty work on his race cars just down the street.

In 1963, Inman joined Petty Enterprises as a crew chief. With Richard behind the wheel, the pair won a series-high 13 races. In 1964 they captured their first Daytona 500 and NASCAR Cup Championship.

Inman pushed himself to learn new skills and to make his race cars faster, safer and downright better than the competition. Inman could be a stickler for preparation, always wanting the car race-ready when it arrived at the track.

In 1967, the dynamic duo of Inman and Petty lit the racing world on fire in their second championship season, winning 27 races with an untouchable 10 of those in a row; neither mark has yet to be matched.

He pushed the limits on pit road and was the first to use the “gas and go” strategy, which won the #43 team their seventh and final Daytona 500 in 1981.

After two seasons with Labonte, Inman returned to Petty Enterprises as a crew chief to Richard once again in 1986 before taking on a management role with the team in 1988.