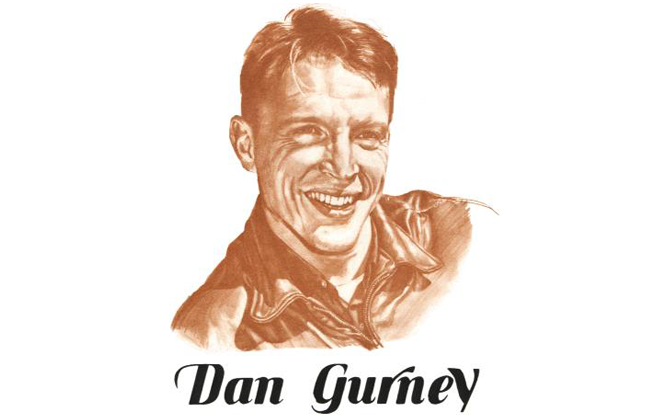 Good thing he couldn’t sing, else the motorsports world might not have ever heard of him.

His father came to Riverside, Calif., from Manhasset, N.Y., after retiring from opera singing. Young Dan couldn’t carry a note, but he was a keen engineer. He built a Mercury flathead and ran it at 138 miles per hour on the Bonneville Salt Flats to become an early drag racing hero.

Born April 13,1931 in Port Jefferson, N.Y., Gurney became interested in sports car while living in Riverside. In 1957, the Riverside International Raceway road course came into being and from the start, Gurney owned it.  He excelled at each level of competition. By 1958, he was a member of the Ferrari Formula One team and later became one of the few Americans ever to win a Grand Prix race.

By 1963 he had left Ferrari because Enzo Ferrari didn’t like his drivers to take outside assignments and Gurney had too many good offers. He competed at Indianapolis in 1963 and finished seventh.

In January of 1963, Gurney was entered in the initial NASCAR race at Riverside, the Motor Trend 500. He drove a Ford. “I was amazed when I first got into the Ford,” he recalled. “There wasn’t that much difference in the way it handled compared to sports cars. The biggest difference was in the braking. The big cars were harder to stop.”

Maybe, but Gurney learned quickly and well. So well, in fact, that he won in 1963 and went on to win the race four times in a row. He won again to make it five times in six races, a rout of the NASCAR regulars.

Gurney’s successes elsewhere were equally impressive. With the Porsche team in 1962, he won his first Grand Prix race. He won twice in 1964 with Brabham, in France and Mexico. By 1966, he had formed his own American Eagle team and on June 14, 1967, he won the Belgian Grand Prix to become the only American to win in a car of his own design.

He co-drove with A.J. Foyt to the 24 Hours of LeMans win in 1967. His first Indy Car win in his American Eagle came that same year in the Rex Mays 300 at, appropriately, Riverside.

Gurney retired as a driver in 1970, but not after winning two Can-Am races that year. He continues, through his All-American Racers organization, to be active in motorsports, his marvelous legacy as a driver firmly established.