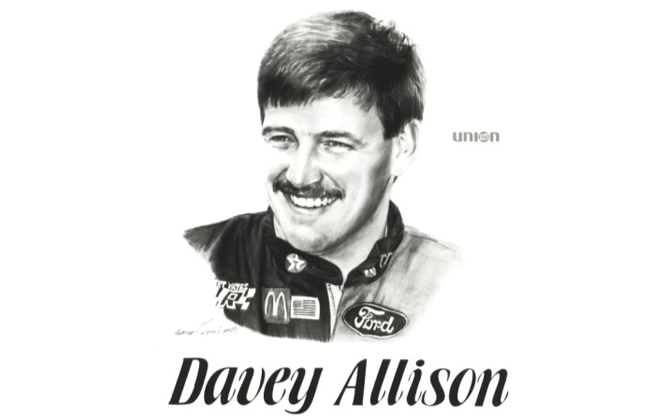 The son of Hall of Famer Bobby Allison, young Davey cut his teeth working at his dad’s shop after school and at night. His behind-the-wheel career began in 1979 at Birmingham International Raceway. Allison finished fifth in his very first feature, and won his first race that year on May 5th in only his sixth start.

Allison raced ARCA, All-Pro, DIRT and ASA Series races, as well as NASCAR Winston West, Busch Grand National, Grand American and Dash Series, winning over 40 short track races, In 1984, he won two ARCA races, and had a shot at the series title, but missed a race while on his honeymoon and wound up second to Bob Dotter by only 25 points. He did, however, win Rookie of the Year honors that season,

Allison ran his first Winston Cup race at Talladega in July of 1985, finishing 10th in Hoss Ellington’s Chevrolet In 1987, Allison won two races, the Winston 500 at Talladega (in only his 14th career start) and later that month at Dover, and was named Winston Cup Rookie of the Year, He was hired by the Ranier-Liandy team that year and became the first rookie to sit on the front row for the Daytona 500.

Between 1988 and 1990, Allison won several races, but his biggest thrill may have been finishing second to father, Bobby, in the 1988 Daytona 500. Later that year, Robert Yates purchased the team. 1991 was a breakthrough season for Allison as he opened the season with back-to-back poles at Daytona and Richmond, then won five races, plus The Winston all-star race at Charlotte.

In 1992, Allison had a season filled with the highest peaks and the deepest valleys that one could imagine. He won the Daytona 500, the Winston 500 and three other races, but suffered severe injuries in crashes at Bristol and Pocono. He lost his brother, Clifford, during a practice session at Michigan. Going for the Winston Million, he was leading at Darlington late in the race, but pitted for fuel just before rain cut it short A wreck in the final race at Atlanta, caused by another driver, likely cost him the Winston Cup title. He wound up third in the point standings, the only time all year he had been that low,

Among the honors that Allison gained in his career were AARWBA Comeback Driver of the Year, Maxwell House Sprint Award, McDonald’s All-Star team and NMPA Driver of the Year, all in 1992. In 199 I, he was named Super Ford Magazine Driver of the Year. Allison also won the 1993 IROC title posthumously as Terry Labonte drove the final race in his place.