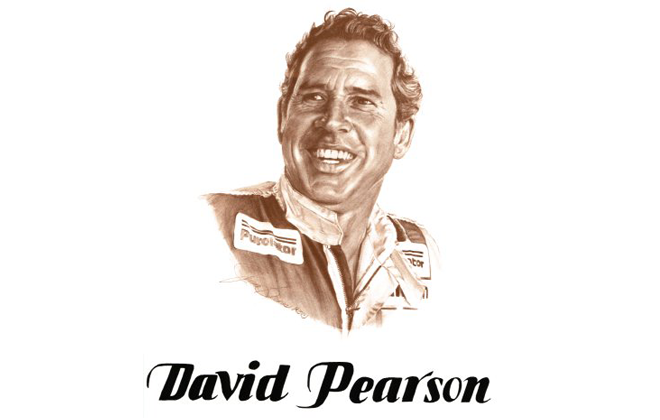 In 1960, Pearson bought his own late model Chevrolet race car and headed to Daytona where he came in 18th. He raced in the first World 600 and came in 10th. Then in 1961, David went on to win three major victories-the World 600, the Firecracker 250 and the Dixie 400 at Atlanta-making him the first man to win, in a single year, on three of NASCAR’s Big Four tracks. Pearson was named Rookie of the Year for NASCAR that season, and became known as a charger.

In 1964, Pearson won eight races on the short tracks and was the fastest qualifier 12 times. In 1966, driving for Dodge, he won 10 of his 15 Grand National victories on dirt tracks, and then earned enough points on the superspeedway to win the first of his three NASCAR championships. Pearson switched to Ford, and in 1968, drove the Ford to 16 victories and 36 finishes in the top five.

In 1969, Pearson became the first man to break the 190 mph barrier at Daytona, qualifying his Ford Talladega at 190.029 mph. He then went on to win the 125-mile qualifying race. In March at Rockingham, he scored a victory in the Carolina 500 and gained victories on each on the South’s existing superspeedways.