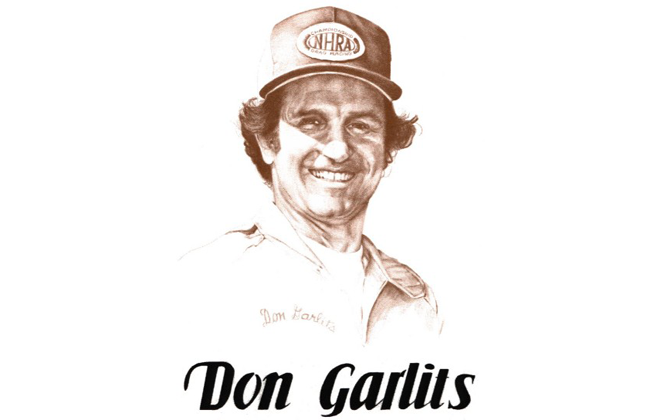 Breaker! Innovator! Dragster of the Decade! Top Fuel Driver of the Year nine times! Big Daddy! Don Garlits, born January 14, 1932, in Tampa, Florida must have raised havoc with the Florida State Police as he tested the engines he built on the highways of the Tampa Bay area, learning the trade which was to take him to the heights of drag racing.

The innovations of Garlits are monumental. He was first to use bike wheels on the front of his dragster, first to employ a hypoid rear end, to experiment with an extended wheelbase, first to use air spoilers, to use port injection on a dragster, first to employ frontal ground effects, triple port nozzles, 4-disk clutch, and first to utilize a successful streamliner in drag racing. In 1971 he revolutionized the sport by designing and building the first successful rear engine dragster, following a devastating explosion that claimed half of his right foot.

In 1985 and 1986 Don was the NHRA Top Fuel World Champion, the first to win this honor back to back. Top Fuel is drag racing’s top of the line category. These 5,000 horsepower, nitromethane-burning dragsters are the fastest accelerating machines in the world. Don Garlits won the world championship in this prestigious category three times and finished in the top 10 five times during his career. He won an incredible 144 national events. As well, he is a ten time AHRA World Champion and five-time IHRA World Champion.

Don Garlits was the first drag racer to have his vehicle placed in the Smithsonian Institute in Washington, D.C.

Don was voted Man of the Year by Drag News in 1971, ’73 and ’75. He was voted Top Fuel Driver of the Year by Car Craft Magazine nine times. Drag Racing and Don Garlits are synonymous. They grew up together.