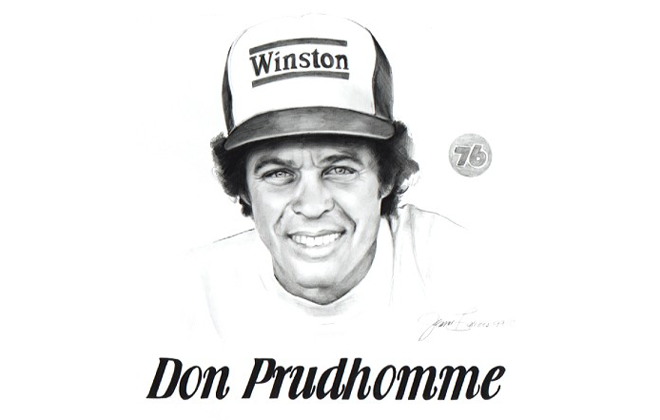 Don “The Snake” Prudhomme is recognized as one of the greatest drag racers of all time. In 1962, Prudhomme first made his mark in motorsports when he won the Top Fuel class at “Smokers March Meet” in Bakersfield, California.

During the next 30 years, Prudhomme won titles in both the Top Fuel and Funny Car classes and took victories in 49 career events. His 32-year-career made it possible for him to win races in four different decades and become fourth on NHRA’s all-time list of wins.

Prudhomme reached the finals 68 times in his career. He won 35 of 45 Funny Car finals and 14 of 23 Top Fuel finals. “The Snake” won 389 of 589 rounds of competition overall for an outstanding .660 winning percentage.

Throughout his career, Prudhomme has broken several barriers in drag racing. He became the first driver to win four consecutive (1975-1978) Winston Series titles and he won the U.S. Nationals seven times. In 1982, he became the first Funny Car driver to break the 250 mph barrier and in 1989, he was the first to post a run of less than 5.20 seconds.

Prudhomme became the first NHRA Winston World Champion in 1975 when he won an amazing seven of eight national events. In 1965, he was the first driver to win both the U.S. Nationals and Winternationals in the same season. At the age of 51, he became the third Top Fuel driver to surpass the 300 mph mark.

Prudhomme continued his own Top Fuel team with new driver Larry Dixon after his “Final Strike” farewell in 1994. In 1997, he added a Funny Car team with Ron Capps driving and he now has strong entries in both. Since his retirement, Prudhomme has been named one of the 100 Most Influential people in the high-performance industry. He has also been inducted into the SEMA and Hot Rod Magazine Halls of Fame.