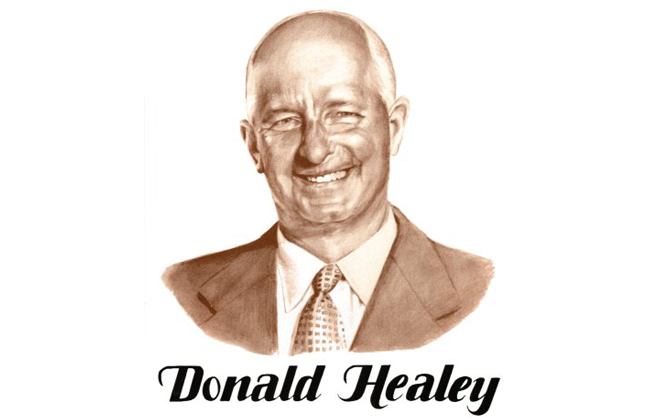 Following an apprenticeship at Sopwith Aviation, he volunteered for the Royal Flying Corps and earned his “wings” in 1916. After WWI, he returned home to study motorcars and engineering. He opened a garage, where his interest grew in rally competition. From the mid-’20s through the early ’50s, Healey was a European rally driver of great distinction, his best finish being first in 1931, in the Monte Carlo Rally.

Immediately after WWII, Healey began to build his own cars; in 1946, his Elliot was the finest production saloon to cover 100 miles an hour. Other cars were the Silverstone and the Nash-Healey, which finished third overall at Le Mans in 1952.

Best-known were the Austin-Healeys, sports cars introduced in October 1952. Various models, including Sprites, were produced until a total ran of nearly 200,000 of which most were exported to America.

In 1972, with Healey as chairman of Jensen Motors, the Jensen-Healey was introduced. For his “services to export,” Healey was made a Commander of the Order of the British Empire (CBE) by Queen Elizabeth II in 1973.

Donald M. Healey died in Perranporth on January 15, 1988, but his automobiles are still being raced, driven, collected, and enjoyed today.