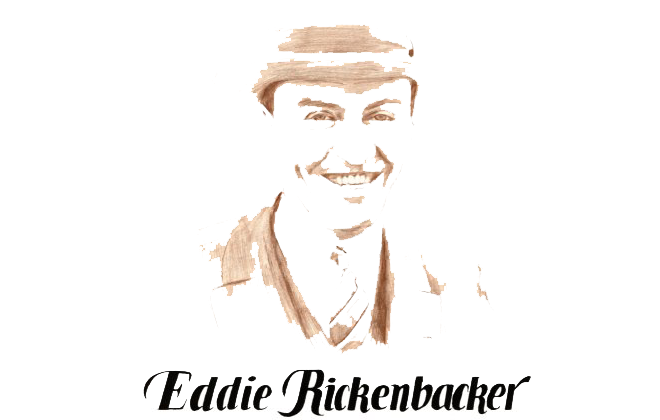 The name Rickenbacker conjures up many pictures-daredevil American flying ace of World War I, president of Indianapolis Motor Speedway in the ’50s, head of Eastern Airlines, World War II aviation advisor and spokesman for conservative causes. Often overlooked are his early years when he was a great racing driver; a contemporary, and equal, of Barney Oldfield and Cano Resta.

Edward Rickenbacker (he changed the spelling at the outbreak of World War I), was born in Columbus, OH, on October 8,1980, Rickenbacker started in the auto business by 1905, working in Evans Garage for 75 cents a day. He took a correspondence school course in auto mechanics and moved to the Fryar-Miller auto plant two blocks away.

His debut race came in 1910 when he raced over a half mile horse track in a 2 5-miler at Red Oak, IA. He didn’t win as the right rear wheel of his Firestone-Columbus collapsed, but that changed quickly. In his next outing in Omaha, NE, he won 10 races of varying lengths over 10 days.

He kept winning until a call came from Fryar. Barney Oldfield was scheduled to race in a 100 miler in Columbus and Fryar wanted Rickenbacker to compete against him in a new car, the light Red Wing Special. The idea was for Rickenbacker to set the pace while Oldfield would push his car to stay ahead of him, thereby wearing out his car and allowing Rickenbacker to win. That is exactly what happened.

Rickenbacker competed in the first Indianapolis 500 in 1911, finishing 11th in the Red Wing Special. The following year, a burned crankshaft knocked him out of the race while he was running fourth.

That summer, Rickenbacker quit Columbus and went to work for Fred Duesenberg at the Mason Automobile Company in Des Moines. For two years, he drove for Duesenberg and then switched to the French Peugeot. He then joined Oldfield at Maxwell and had many famous races, perhaps the most well known being on a paved one mile track in Providence, RI. There, Rickenbacker battled it out with Bill Burnam for most of the race before taking the lead for good on the 98th lap. The victory was worth $10,000.

With his winnings, Rickenbacker approached Carl Fisher and Jim Allison with a plan to operate his own racing team of four Maxwells. The combine was formed and two-car teams competed at nearly every track in the United States. Rickenbacker’s management and constant practice which made his pit crew the best in the business made the difference. For example, in a race at Tacoma, WA, Rickenbacker was expected to lose to Ralph Depalma’s Mercedes, which outclassed the Maxwell. But Rickenbacker picked up almost 30 seconds at the 225 mile mark because his crew changed four tires in 32 seconds where it took Depalma’s crew 62 seconds. Rickenbacker won another $10,000.

All told, in 1916, its last full season, Rickenbacker’s Maxwell team won seven of the 13 major races it entered. In 1917, Rickenbacker joined a team of Duesenbergs for the Vanderbilt Cup races, scheduled for CA. It was before this race, while driving near Riverside, that Rickenbacker got his first airplane ride from a young man by the name of Glenn Curtiss. Rickenbacker didn’t win the Vanderbilt Cup, but he won a later race at Ascot in Los Angeles. It was to be his last auto race.

Rickenbacker went to Britain to race a Sunbeam but the trip turned out to be an abortive one. He was suspected of being a German spy. Soon after his return to the United States, World War I broke out and he was determined to be in it, and fly if possible. At first, he drove a staff car for Billy Mitchell, Blackjack Pershing’s boss of the military aviation section. At 28, Rickenbacker was transferred to aviation school and after 25 hours, he received his wings and commission.

In March 1918, he joined the 94th Aero Pursuit Squadron and in seven months became Ace of Aces, shooting down 26 German planes in 134 air battles. He was a national hero.

In 1921, he formed the Rickenbacker Motor Company and cars bearing his name appeared at the New York Automobile Show in 1922. The venture lasted five years. The Rickenbacker cars were good machines, but a recession and better financed competition were too much for the undercapitalized company. In 1927, it went into bankruptcy. After raising $250,000 to pay off his personal debts connected with the company, Rickenbacker raised another $700,000 and bought Indianapolis Motor Speedway. He assumed control on November 1, 1927, and set out to modernize the track. He resurfaced the bricks which gave the Brickyard its name, added a golf course and made many other improvements modernizing the magnificent track.

He jointed General Motors the following year and when GM had to sell Eastern Airlines, Rickenbacker managed to come up with the $3.5 million necessary to buy it. World War II broke out, Rickenbacker again flew, but crashed and spent 22 days on a raft in October of 1942 before being rescued. He charged back into action, his services including a mission to Russia.

Rickenbacker rose to a larger than life legend and not only on the race track. He had to be a winner and he always was. In July of 1973, at the age of 82, he died while on a visit to Switzerland.