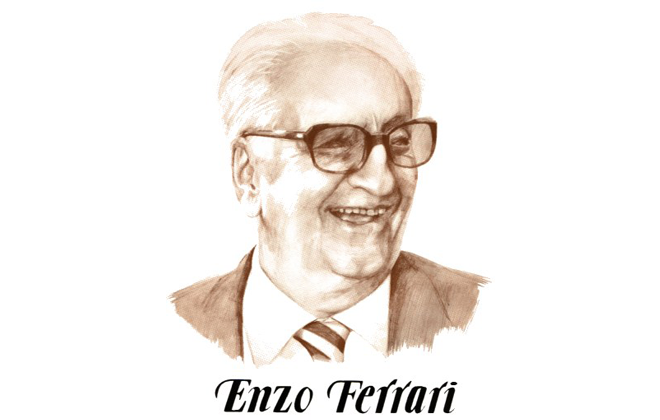 Enzo Ferrari was born in Modena Italy on February 18, 1898. He was the second son of Adalgisa and Alfredo, who ran a small metal business that forged axles for the Italian railroads. A fortuitous seed was planted in Enzo on September 6, 1908; he witnessed his first motor car race with his father and brother and that sparked a desire to become a race car driver. But the road to achieving that dream was paved with heartbreak and hard work.

Both Enzo’s father and his older brother, Dino, died in 1916 as a result of the Italian flu outbreak. That tragedy led to the collapse of his family business. Enzo served in WWI by shoeing mules in the Italian Army. In 1918, Ferrari became ill with the same flu that took his father & brother’s lives. He was critically ill, almost losing his own life, and subsequently discharged from the army.

Enzo had aspirations of working for FIAT, but after his application was rejected, he got a job as a test driver at a small car maker called CMN. He debuted in 1919, in the uphill race from Parma to Poggio di Berceto, where he finished ninth.  The following year his twenty-year collaboration with Alfa Romeo began, first as official driver, then as director of the racing department.

In 1923, after winning the Circuit of Sivocci at Ravenna, Ferrari met the father of one of Italy’s legendary fighter pilots, Francesco Baracca who had been shot down in WWI. Baracca’s father was so affected by Ferrari’s performance in the 1923 Savio race that he offered his son’s prancing horse emblem to Ferrari as a tribute. Ferrari was overwhelmed and it has been used ever since.

In 1924, he achieved his greatest racing victory at the Coppa Acerbo at Pescara. Later in life, Ferarri himself recounted the win, “… Among the different competitions whom, in that time, I participated in, I remember with particular satisfaction my victory at Pescara in 1924, with an Alfa Romeo R.L.”

This victory, and his accumulation of other successful finishes, had made Ferrari a well known name. Meanwhile, at this same time in history, Benito Mussolini had taken control of Italy and established his fascist regime. Mussolini used Ferrari’s popularity as a propaganda tool to promote aggressive nationalism. Alfa Romeo encouraged Ferrari to participate in more prestigious races, but he turned down the offer. He had been suffering from emotional breakdowns due to being overburdened and stressed; he did not race again until 1927.

A look back at Ferrari’s career shows that his most impressive successes came as a team organizer and director rather than a race car driver. In 1929, he started Scuderia Ferrari, a team made up of drivers and technical assistants that worked for Alfa Romeo. His team of over 50 drivers racked up an impressive eight victories over 22 competitions.

In 1932 Ferrari became a father to his son Dino, and subsequently completely retired from racing. He resigned his tenure at Alfa Romeo in 1937, and that led to his formation of Auto Avio Costruzioni, the predecessor of Ferrari.

The Beginning of Ferrari, the Car

The first victory for Ferrari was in 1947 at the 125 S. Ferrari participated in the first ever F1 Championship in 1950, and has remained the only team that has participated since the beginning. Ferrari’s focus on Formula 1 cars led to much success;  in 1953 and 1954 Ferrari’s cars won the World Drivers Championship. Between 1960 and 1965, Ferraris won every Le Mans, and between 1958 and 1964 they won six of the seven Sebring races. His cars are still leaders in the performance world today.

The last model to receive Enzo Ferrari’s personal approval before his death was the iconic F40. The F40 was designed to celebrate Ferrari’s 40th anniversary with only 400 ever built.