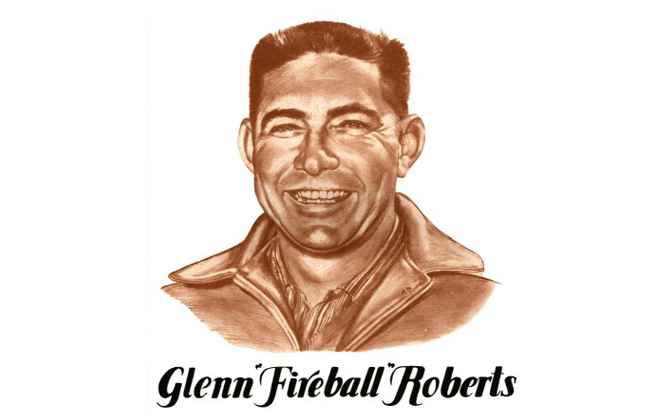 From an inauspicious start on the hard-packed sands of Daytona Beach, Fla., in 1948, Edward Glenn Roberts Jr. fashioned one of the most successful and glamorous careers in NASCAR.

“Fireball” was a name everyone recognized. He was the epitome of the exciting, young racing star. Oddly enough, he didn’t get the nickname through his on-track achievements. Rather, he earned it for his ability to throw a baseball. But baseball was never his primary interest. Racing was.

From the time he started on the beach course at Daytona when he was 17 – he wrecked on the ninth lap of a Modified race – until his untimely death in 1964, Roberts shaped a career that saw him win 24 times in 204 races. He set more than 400 records at various tracks, including 1,644 laps led at tough, old Darlington (S.C.) Raceway, NASCAR’s first superspeedway.

Born January 20,1931 in Daytona Beach, Roberts attended the University of Florida but never graduated. He preferred racing and struck out to find his way in the sport. He found his way into NASCAR in 1949 and his career began in earnest.

He won several times over the years, but it was on the fast, exciting new superspeedways that began to crop up in the late ’50s and early ’60s that he made his mark. He won the Firecracker 250 at Daytona International Speedway in 1959 and then, in 1962, he won the Daytona 500 and the Firecracker again, thus becoming the first man to sweep the speedway’s two events in a single season. In 1960, he won the Dixie 500 at Atlanta International Raceway.

His 1963 victory was particularly significant. He came to the track in excellent physical shape after recovering from an injury. His plan was to start in the middle of the pack, which meant having to qualify on the second day. During practice, however, he hit the guardrail in his No.22 Holman-Moody Ford and almost washed the car out. But it was repaired in time for him to set a qualifying mark of 133.819 miles per hour that got him the ninth starting spot.

Roberts ran a cautious race until the latter stages, when he began to charge. He took the lead with only 75 laps left and won in a cakewalk. He had run the perfect race, saving man and machine.

A year later at Charlotte Motor Speedway, Roberts was involved in a fiery crash with Ned Jarrett and Junior Johnson. Severely burned, he survived for 37 days before he succumbed to pneumonia.

It was a blow to the racing world. Many have said there was no predicting how far Roberts would have progressed as a driver, since he was clearly the pathfinder of the superspeedway era. However, his niche had already been carved. When he left, he was vastly popular and vastly successful.