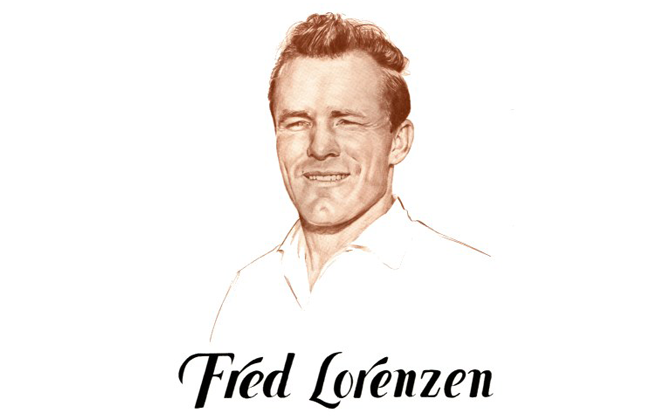 He was handsome, he was articulate and he could drive. Just as the “superspeedway” era of NASCAR began to develop, he was there. He rolled to repeat victories on the big tracks, racking up 26 wins in his career. He had a stellar season in 1963, during which he won a then-record $113,570 while driving for the legendary Holman-Moody team.

Born one of six children, Fred displayed a talent for cars early in life. When he was 13, he built a small car from junk parts and an old washing machine motor. The police took it away from him because it went too fast. Later, while in high school, he entered a demolition derby and won, pocketing $100. It didn’t take him long to figure out there was profit in fun.

He began racing Modifieds throughout the Midwest while working as a union carpenter. He moved to Late Model Stock Cars in 1957, driving in USAC competition. He raced his Chevrolet four times that year and finished 10th each time.

Undaunted, he switched to Ford the following year and won five of seven events. He won at Milwaukee twice, at Trenton, NJ., DuQuom and Meadowdale, Ill. In 1959, he won six of 13 starts.

Now known as “Fearless Freddie,” he moved to NASCAR in 1960, driving his own Ford. He soon found out he was no match for the factory teams but he ran well enough to impress Ralph Moody, who made him an employee of Holman-Moody.

Lorenzen won at Atlanta again, took the World 600 at Charlotte Motor Speedway, among others, to set the earnings record. In 1964, Lorenzen won at Atlanta once more, becoming the first driver to win three straight times on the same superspeedway. He also won at Bristol, Tenn., Martinsville, Va., and North Wilkesboro, N.C. He then won at Indianapolis Raceway Park and once more at Darlington.

But he came back in 1970, nearly winning at Charlotte once more – and proving, in the process, he still had what it took. Late that year, he and his father were in a traffic accident that left his father seriously injured. But in 1971, Lorenzen was back at it, in a Ray Nichels Plymouth. He raced 15 times that year and made eight starts in a Chevrolet in 1972 before retiring for good.

Even today, with the superspeedway the staple of NASCAR’s diet, Lorenzen, who has become successful in real estate, feels he can get the job done. By his own admission, he “retired too early.” Perhaps he did. One wonders what might have happened if “Fearless Freddie,” racing’s “Golden Boy” had pressed on.