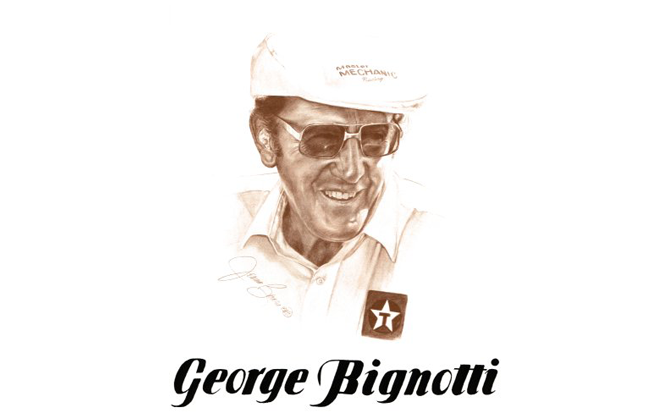 George Bignotti was born in 1918 in San Francisco, California, and with two older brothers, both of whom were racing mechanics, learned how to handle a wrench at an early age. The boys eventually bought a midget and raced the car several times a week, with George as the substitute driver. If the regular driver didn’t show for a race, George would drive, and one year he achieved 14 victories out of 18 starts.

However, George decided that his place was as a mechanic, and in 1954 he was requested to straighten out a car for the Indy 500. That car coded up finishing 6th at Indianapolis. In 1956, George Bignotti, working with Frank Kurtis, was credited with the first Indy roadster. Bignotti and A. J. Foyt teamed up in 1960, and in 1961 and 1964 they won the Indianapolis 500. They also won the USAC Championship three times in four years.

In 1962, Bignotti was the USAC Mechanic of the year, and in 1965 achieved international fame as the man who Americanized Lotus, preparing it for racing in the United States. In 1966, Bignotti went to work for the John Mecom team and was exposed to the Lola. It was during this time that he and Al Unser came together, and at the same time started thinking about how he could combine features from both the Lola and the Lotus into into a better car.

In 1968, Bignotti and Unser ran the season in the wedge-shaped, part Lola, part Lotus, and part Bignotti car. In 1969, those ideas went into the Colt chassis when he affiliated with Parnelli Jones. In 1971, Bignotti became the chief mechanic of the Al Unser and the Vel-Parnelli Jones team. In 1972, more of Bignotti’s ideas were used with Unser, Leonard and Andretti.

The USA Championship Trail’s single season record for victories is 10, and is held by both A.J. Foyt and Al Unser. Each time, George Bignotti was the mechanic.