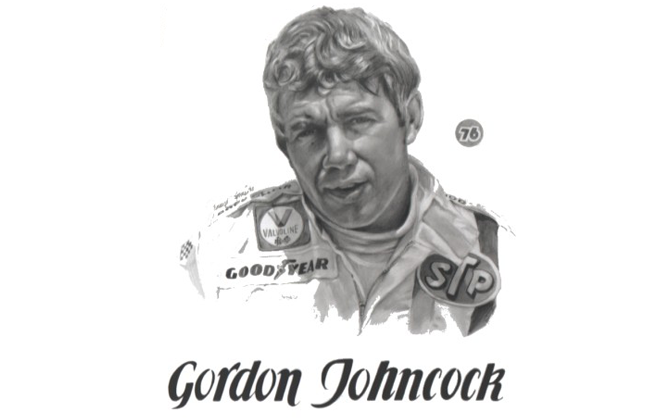 Gordon Johncock was one of the premier drivers of Indy Cars for nearly three decades, winning the 1976 USAC National Championship, and claiming two wins in the Indy 500.

A native of Hastings, Michigan, “Gordy” Johncock began his racing career in Midwestern modifieds and USAC sprint cars. While he was highly successful in the modifieds, he was something special in the sprint cars. Johncock set a world half-mile record at Winchester, Indiana in 1964, the same year he made his USAC Championship Trail debut on the one-mile dirt track in Springfield.

Johncock ran Indy the first time in 1965, finishing fifth. His first major championship win came later that year at Milwaukee as he out-dueled A.J. Foyt for the victory. Johncock was fourth at Indy in 1966, and also finished fourth in the championship points.

In an accident-marred, rain-shortened 1973 race, Johncock got his first Indianapolis 500 victory. With new sponsorship from STP, he also won at Phoenix and Trenton. The following year, he was third in the points, with wins at Milwaukee and Phoenix.

Following a huge disappointment at Indy in 1975, in which he qualified 2nd and finished 31st, Johncock rebounded in 1976 to grab third place in the Indy 500, a race that propelled him to his first USAC national championship.

Beginning in 1978, Johncock had a string of five consecutive Top Ten finishes that culminated with his second Indianapolis 500 victory in 1982. This time he beat Rick Mears by 16/100ths of a second, the closest finish ever at Indy at that time.

After winning the 1983 season opener in Atlanta, Johncock suffered season-ending injuries in a crash at Michigan. 1984 was his last full season, and he announced his retirement in 1985. Missing it more than he had anticipated, Johncock came out of retirement briefly in 1987, but raced only twice in 1988 and three times in 1989, retiring for good in 1992.

During his career, Johncock competed in 261 races, winning 25 times and earning 20 poles. His winnings amounted to well over $3 million.