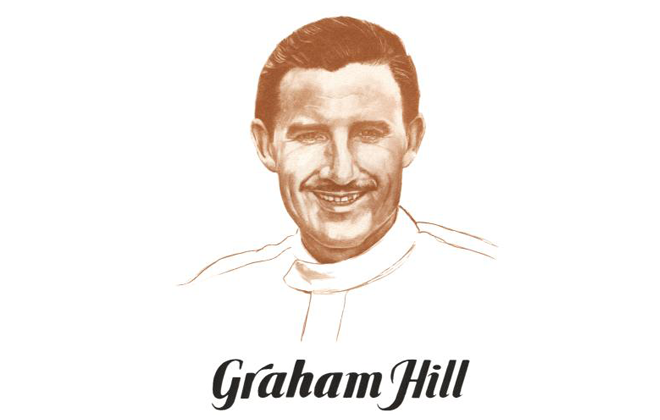 Norman Graham Hill was horn in Hampstead, a suburb of London, on Feb.15, 1929. Remarkably, he was 24 years old, out of school and with a job, before he ever drove a car. He bought a Morris 8 in 1953 and didn’t pass his official driving test until weeks later. Then, that same year, he stepped into his first racing car for four hot laps around Brands Hatch after paying up to join the Universal Motor Racing Club.

Hard to believe this unlikely indoctrination into racing world culminate in two World Championships in 1962 and 1968, and the Indianapolis 500 championship of 1966, his rookie year at The Brickyard.

It wasn’t long after his introduction at Brands Hatch that Hill determined racing was for him. He wanted to drive, but worked as a mechanic. He met Colin Chapman and got an opportunity to drive in a Jaguar in 1955.

Then, later that year, Hill tested a new Lotus and produced die second-fastest speed, which delighted Chapman, who eventually gave Hill his first crack at Formula One in 1958.

He went to BRM two years later and in 1962, he won the Dutch Grand Prix for his first Formula One victory. lie won twice more to claim the World Championship. For the next three seasons, he would finish second in the Formula One standings, although he would continue to win.

In 1966 at Indy, Hill’s victory led a one-two sweep for the United Kingdom, as Scotsman Jim Clark was second. The race was marred by an 11-car crash at the start, which lull avoided. When the race restarted over an hour later, there were 22 cars remaining. Hill, driving a Lotus-Ford, raced cautiously and expertly, passing one ill car after another until the 191st lap, when he took the lead and won handily.

In 1969, when lie was 40, Hill was hardly considered a contender for the World Championship. But he did well until a crash in the United States Grand Prix threw him out of the cockpit of his car and broke both his legs.

Months of pain and a four and one-half hour operation in London followed. Hill said he would come back and, to the amazement of many, he did when he started.  The South African Grand Prix on March 7, 1970. He finished sixth in a courageous performance.

Hill continued to race through 1972, when he shared a victory in sports cars with Gils van Lennep at LeMans.