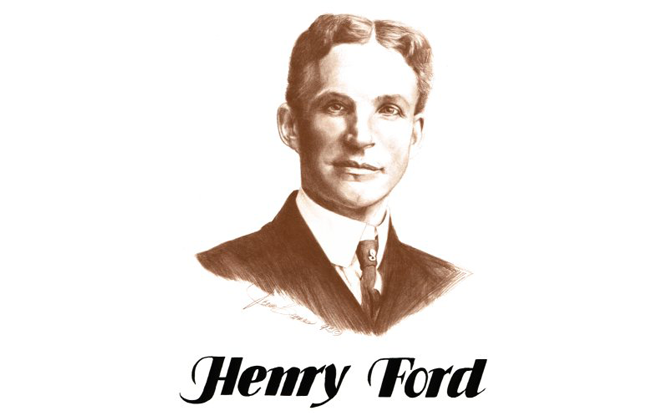 Few names are as widely recognized in automotive history as Henry Ford. In addition to his contributions to the automobile company that bears his name, Ford also transformed production with development of the assembly line, the labor market with higher-than-average minimum wages and shorter workweeks, and American life for generations to come.

The Early Life of Henry Ford

Henry Ford was born on July 30, 1863, in Wayne County, Michigan. He was the first child born to Mary and William Ford, who would go on to have three more boys and two girls. Henry’s father emigrated from Ireland in 1847 and settled on a farm in Michigan, about eight miles west of Detroit. Ford attended school in a one-room schoolhouse in between helping his father on the farm with harvest. As a boy, Ford showed interest in mechanics. By the age of 12, he was spending any free time he had in a small mechanics shop he had equipped. It was there, at the age of 15, that Ford built his first steam engine.

When he was 16, Ford walked to Detroit to find his first job. He found work as an apprentice at the Michigan Car Company, a manufacturer of railroad cars. He also became a machinist in the shops of James F. Flower and Brothers and in the Detroit Dry Dock Company plant. From there, he spent a year setting up and repairing Westinghouse steam engines in Southern Michigan.

Henry Ford and Clara Jane Bryant were married on April 11, 1888. Clara had grown up on a farm not far away from the Ford family farm. Henry and Clara had one child, a son, Edsel Bryant Ford born on November 6, 1893.

Ford and the Edison Company

In July 1891 Ford began working at the Edison Illuminating Company of Detroit as an engineer. He would later become chief engineer in 1893, picking up a lifelong friend and mentor in Thomas Edison along the way. It was at the Edison Company where Ford began experimenting with two and four-cylinder engines which would power a low-cost automobile.

In 1893, Ford’s dreams became a reality when he constructed a small, single-cylinder gasoline model- his first working engine. Its first trek was across a small wooden table at the Ford home in Detroit. Ford built off this successful model to craft his first automobile, which was essentially an engine fitted around four bicycle wheels. The first Ford vehicle, the Quadricycle, was completed in June 1896.

The Beginnings of The Henry Ford Company

Ford left the Edison Company on August 19, 1899. He organized the Detroit Automobile Company, which was short lived. The company declared bankruptcy about 18 months after its formation. In the meantime, Ford spent his time building race cars, and was even successful in racing his own car he named Sweepstakes.

In November 1901, Ford founded his second motorcar company, The Henry Ford Company. Ford would eventually leave this company, which would go on to become the Cadillac Motor Car Company. It was at that time Ford took another dive into making race cars, creating the 999, which would go on to crack the world record for fastest mile. The 999 crossed the ice-covered Lake St. Clair in Michigan in 39.4 seconds on January 12, 1904.

Henry Ford and a group of 12 investors invested $28,000 into the Ford Motor Company in June 1903. It didn’t take long for the Ford Motor Company to build and sell its first vehicle- that happened about a month later on July 15, 1903. In 1906, Henry, Clara and Edsel bought the remaining stockholders out of their shares and became sole owners of Ford Company Company.

The famous Model T was introduced in 1908 and quickly became popular due to its low price and nationwide publicity from racing. In the 19 years that the Model T was produced, Ford sold 15,500,000 units in the U.S.,1,000,000 in Canada and 250,000 in Great Britain. The affordable and accessible automobile led to an agricultural revolution and urbanization.

The popularity and success of the Model T was largely due to one of the most technological advancements in production to date- the constantly moving main assembly line supported subsidiary assemblies. This allowed the Ford Motor Company to produce one complete chassis every 93 minutes – a massive improvement over the previous 728 minutes previously required.

Ford also gained worldwide popularity when he announced in 1914 that the Ford Motor Company would raise the minimum wage of Ford workers to $5 a day- compared to the $2.34 industry average. He also announced a shorter workday- eight hours instead of nine, converting the factory to a three-day shift. Further advancements in the assembly line eventually led to turning out a Model T every 24 seconds.

The Later Years of Henry Ford

The Ford Motor Company experienced change in 1919, when Edsel succeeded his father as president, a title he held until his death in 1943. Henry Ford regained the title and position following his son’s death.

Henry Ford retired from the Ford Motor Company for the second time in September 1945, and recommended his grandson, Henry Ford II as president. The board of directors supported his decision.

In his retirement, Ford collaborated with Samuel Crowther to write several books. My Life and Work was published in 1922, Today and Tomorrow in 1926, Moving Forward and Edison, As I Know Him in 1930.

Henry Ford died in his Dearborn, Michigan home on April 7, 1947 following a cerebral hemorrhage. He was 83.

Henry Ford was posthumously inducted into the International Motorsports Hall of Fame in 1993.