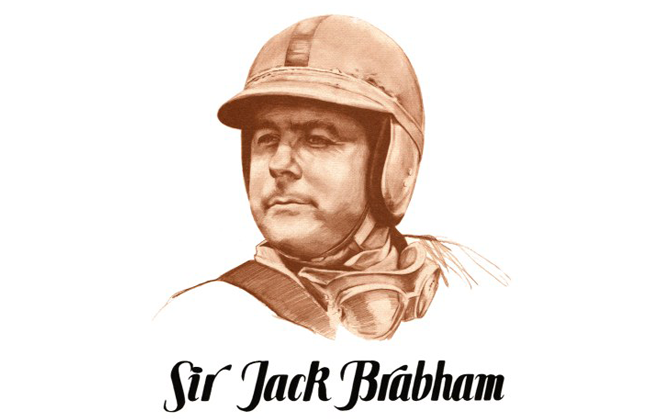 Jack Brabham’s accomplishments are so many and so varied it is hard to determine just what has placed him among the elite corps of the world’s greatest racing drivers.

Is it the fact he won the World Championship three times, in 1959, 1960 and 1966? Is it because his last world title came in a car of his own construction? Is it due to his talent as a discoverer, developer and booster of young talent?

Perhaps it is all three. Born April 2, 1926 in Hurstville, Australia, John Arthur Brabham is the son of a green grocer. Young Brabham drove his father’s three trucks around and around the yard, becoming acquainted with motor vehicles. He quit school at 15 and went to work in a garage.

He was introduced to Midget racing by an American expatriate named John Schonberg in 1947. Although Brabham didn’t take to driving at first, he soon mastered the art and won the New South Wales championship, the South Australia championship and the Australian championship in 1948-49.

From there, Brabham became involved in hill climbing and dirt-track racing until, by 1957, he was firmly entrenched as a member of John Cooper’s factory team in England, driving in Sports and Formula Two cars. That same year, he began his Formula One career.

On May 12, 1959, Brabham won his first Formula One race, at Monaco, which helped propel him to his first World Championship. In 1960, he won five Grands Prix in a row en route to his second consecutive title.

By 1966, Brabham was racing his own Formula One cars. In the French Grand Prix of that year, Brabham became the first driver in Formula One history to win in a car of his own design. The “old man” of 40 completed the season with his third World Championship.

That same year, he received the Order of the British Empire for his many accomplishments.

He pressed on, competing on the Formula One circuit through 1970 – an amazing record of longevity. “If you have the right approach to racing and are reasonably fit, it doesn’t matter what your age is,” he said.