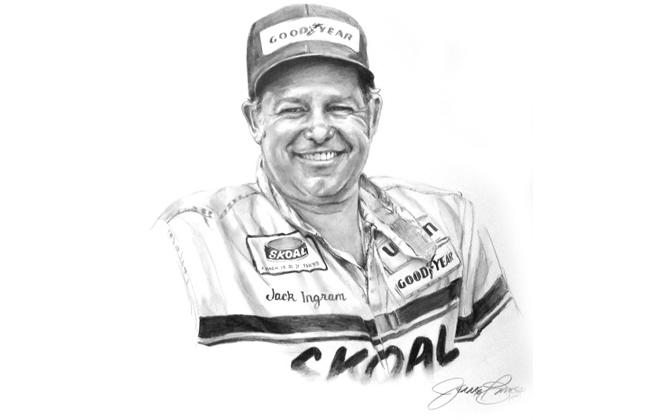 “Ironman” Jack Ingram was one of the dominant drivers in the old Grand National Series (Late Model Sportsman Series), and didn’t miss a beat when NASCAR introduced its new Busch Series in 1982, winning the very first championship.  Ingram, from Asheville, North Carolina, claimed his first Late Model Sportsman Series championship in 1972, and it was no accident.  Ingram spent the five previous years racing at many of the same tracks on which the championship was contested, learning them and how to set his car up to race on them.  He won that first title by 1,650 points over Tony Bettenhausen, Jr.  It also ended a string of three straight championships by Red Farmer, and began Ingram’s own streak of three in a row.  His fourth title came in the first year of the Busch Series, and his fifth and final one came in 1985.  At the time of his retirement in 1991, Ingram was the Busch Series all-time win leader with 31.  In his career, Ingram won hundreds of races, including the Daytona Permatex 300 twice, (1975 and 1980) and captured many track championships.