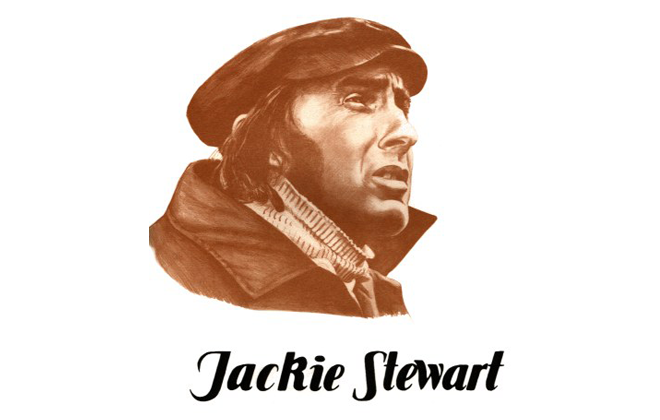 Although diminutive in size, Jackie Stewart, “The Flying Scot,” was a giant in racing circles. He became perhaps the most readily identified competitor in all the world during his successful, championship years in Formula One racing.

Three times, in 1969, 1971 and 1973, he won the World Driving Championship. He drove in 99 Grand Prix races with 27 victories, an astonishing winning percentage. Beyond that, he was outgoing and intelligent, comfortable with the general public, corporate leaders and in front of television cameras. He became an outstanding spokesman for racing.

He was born in Milton, Dunbartonshire on June 11, 1939. His father was a motorcycle racer who established an automobile dealership and garage. His older brother was a race driver who drove Sports Cars regularly. But because of his crashes, the family wasn’t in favor of young Jackie pursuing a similar career.

But he did, starting out in the family Jaguars and then moving on to Grand Touring racing. He was competing in Formula 3 races in 1964 and five days after he won his first race on the circuit, he was offered a Formula One ride – which he turned down because he felt he wasn’t ready.

Later that year, however, he did take a Formula One opportunity with Colin Chapman. He moved over to the BRM team in 1965 as a teammate to Graham Hill and was sixth in his first race, in South Africa. He was to have several more good runs – especially a second in Holland – before he won his first race in 1965 at Monza.

He won again at Monte Carlo in 1966. After a somewhat disappointing season in 1967, Stewart joined Ken Tyrrell for the 1968 season, driving a Ford-powered Matra. He won the Dutch, German and United States Grands Prix and moved into second place in the World’s Championship standings, just two points behind Hill with only the Mexican Grand Prix remaining. He finished seventh and was the season runner-up to Hill.

But he wouldn’t be denied in 1969. He won seven of 14 Grands Prix, including one non-title race, and claimed the World Championship early. He started the 1970 season in a new March, but later switched to a Tyrrell. Before the 1971 campaign began, Stewart was deluged with offers from at least six factory teams but decided to remain with Tyrrell. It proved a fortunate decision.

Stewart enjoyed a victory streak that carried him to his second World Championship. He won in Spain and Monaco and then swept the French, German and British Grands Prix to sew up the championship. He won again in Canada and his six victories was just one short of Jim Clark’s season mark. Because of his achievements in ’71, Stewart was honored with the Order of the British Empire.

In 1972, a bleeding ulcer plagued Stewart’s efforts, and he thought about retiring, even though his many endorsements and public appearances had made him one of the most recognizable figures in racing. But he decided to come back in 1973 and, true to form, he won another World’s Championship, surpassing Clark’s record of 25 victories in the process.

Although now retired, Stewart remains an eloquent spokesman for racing, through television commentary and other means, and is especially keen on racing safety. Beyond that, his racing legacy is the establishment of a career – which includes victories in Can-Am competition and highly competitive runs in the Indianapolis 500 – that inarguably was one of the best.