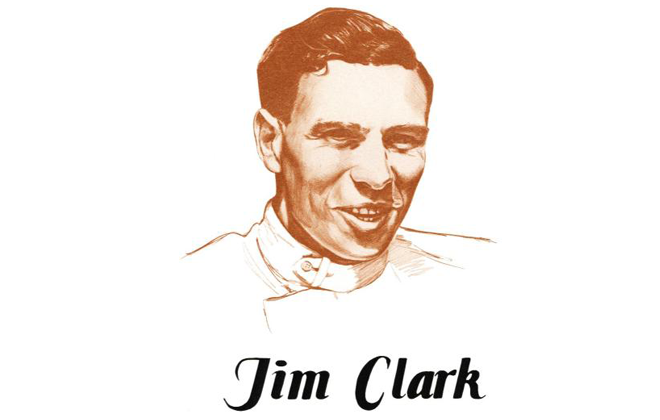 James Clark Jr., the apple-cheeked Scotsman born March 4, 1936 to a sheepherder in Kilmany, Scotland, is considered one of the greatest drivers ever.

At first content to help his father with the prized sheep, Clark got bit by the racing bug early and by 1956, he had won his first race; a sports car event. He later was signed by Colin Chapman to compete on the Formula One circuit and on June 5,1960, he drove in his first World Championship event, the Dutch Grand Prix. He retired in mid-race.

But that was to be followed by great success. He won his first Grand Prix on June 17,1962, in Belgium. He was very much in contention for the World Championship that year but lost it to Graham Hill.

Clark turned the tables in 1963, however, putting together a string of four straight Grands Prix wins en route to the championship. That year, however, brought him greater notoriety for a race he didn’t win, the Indianapolis 500.

Clark came to Indy in a sleek, rear-engined Chapman Lotus. When the regulars in Gasoline Alley saw it, they laughed – until they discovered it was a contender.

Sure enough, Clark was in the hunt by race’s end. He had been content to stay behind Parnelli Jones for 170 laps and then make up the distance quickly. He was doing that nicely until smoke and oil began trailing from Jones’ car.

Chief Steward Harlan Fengler became the point of attention. Would he flag Jones off the course? Twice Clark slid in the oil put down by Jones’ car. Fengler held off and the leak eventually stopped. Jones won the race.

“Better not to win that way, with the man in front of you flagged off the course,” said Clark in a fine display of sportsmanship that captured the fans’ hearts. Clark would return to win the 1965 Indianapolis 500 over Jones by more than a lap.

That same year, Clark put together a string of five straight Grands Prix wins as he took a second World Championship. He continued to win throughout 1966-68 as well, winning his record 25th event in South Africa in the first race of the 1968 season.

On April 7, 1968, Clark lost his life in a crash in a Formula 2 race at Hockenheim in Heidelberg, Germany. By that time, however, his fame as a race driver had long been established. It endures today.