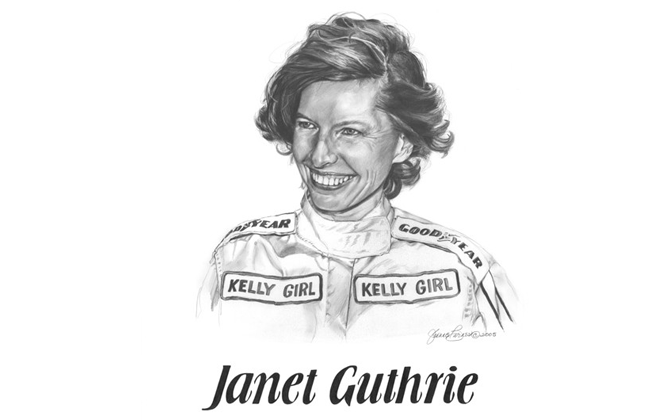 Guthrie twice set fastest time of day at Indianapolis (May 7 and May 22, 1977.)  Her Indy-car career totaled 11 races spread over five years, none with a high-ranked team.  Her best Indy-car finish (5th, Milwaukee, 1979) and best qualifying position (4th, Pocono 500 Triple Crown, 1979) were not bettered by a woman until more than twenty years later. In NASCAR Winston Cup (now Nextel Cup) stock car racing, Guthrie finished as Top Rookie in the Daytona 500 and in four other Winston Cup races in 1977.

Prior to Indianapolis, Guthrie had 13 years of experience in sports car racing, including First Under-2-Liter Prototype (1970) and First GT6 (1967) in the Sebring 12-Hour race.   She was a pilot and flight instructor and an aerospace engineer.  Her helmet and driver’s suit are in the Smithsonian Institution.  She is a charter member of the Women’s Sports Foundation International Women’s Sports Hall of Fame.

Her book on her racing adventures, “Janet Guthrie: A Life at Full Throttle” (Sport Classic Books, May 2005) was published to critical acclaim.