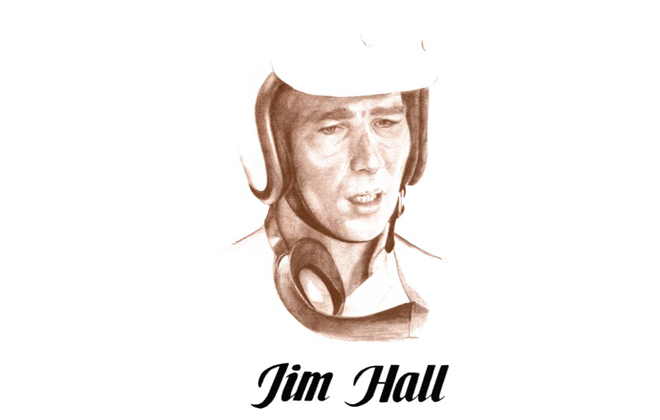 Jim Hall was the sort of competitor who was satisfied with nothing short of victory. When the car he was to this desire, he did something to rectify the problem.

Jim Hall was born July 23,1935, in Abilene, Texas and was reared in Colorado and New Mexico. In 1954 when he was a student at CalTech, he began driving his brother’s Austin Healey sports car at weekend road races. He credits Carroll Shelby with teaching him how to drive a sports car.

In 1960, Jim fitted a Formula 2 Lotus with a 2.5 liter Climax and drove in his first Formula 1 race at Riverside, In 1961, he won main events at Palm Springs in a Cooper Monaco and at Las Vegas in a Birdcage Maserati.

In 1963 Jim built the first historic Chaparral 2. Laguna Seca, Watkins Glen, Road America and the Daytona 200 were just a few of the races he won. The Chaparral 2 won 16 of the 21 races entered in 1965. From 1963 to 1970 his engineering genius turned out a series of dramatic race car innovations which have left a lasting impact on the sport. He introduced the ultra-light chassis – (often called the all-plastic-car) – which was in reality a chassis built completely of reinforced fiberglass. Then he staggered the competition with the high-mounted wing. This innovation rode in a horizontal position down the straightaway but tilted down in the turn giving extra down force in the corners. He ran over half a season on the road courses with an automatic transmission, with no one knowing what allowed him to keep both hands on the steering wheel though the corners. His Chaparral 2J “Vacuum Cleaner”, the first ground effects race car, allowed him to sail at incredible speeds through the corners, due to an auxiliary motor that created a vacuum under the car to increase traction.

Jim Hall was a race driver. But he was also a design genius, advancing race car technology to such a degree that IndyCar drivers of today are able to turn the famed Brickyard at better than 200 mph.