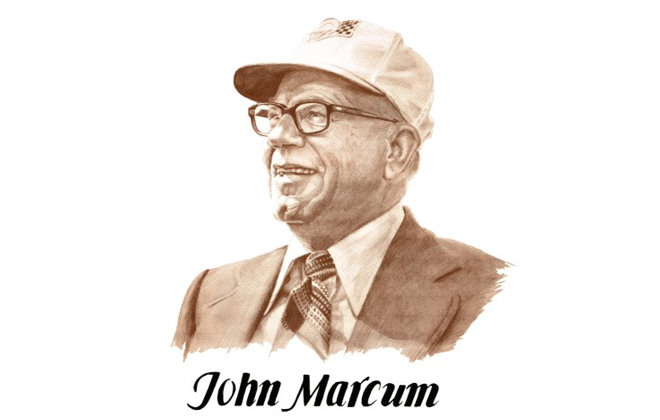 In 1930, at the age of 14, John Marcum lied about his age and drove the family car in a 30 lap feature race at a southern Indiana track. By the mid-1940’s Marcum was a veteran of racing, when, at the Daytona Beach course on the sand he crashed and landed upside down. Racing against Marcum that day was Bill France, Sr. France convinced Marcum to give up driving and try his hand at Officiating. For the next five years Marcum presided over various aspects of NASCAR events. In 1951 Marcum returned to his home in Toledo, Ohio and formed the Midwest Association for Race Cars (MARC). In 1963 France asked Marcum to bring his MARC racers down to Daytona for a new concept, the February Speedweeks. Subsequently, the Midwest Association for Race Cars (MARC) became the Automobile Racing Club of America (ARCA). ARCA new model stockers no longer battle on just the tracks of the midwest, their racing venue now extends throughout the U.S. Very much like Bill France, Sr., John Marcum was a super race promoter for over 30 years.