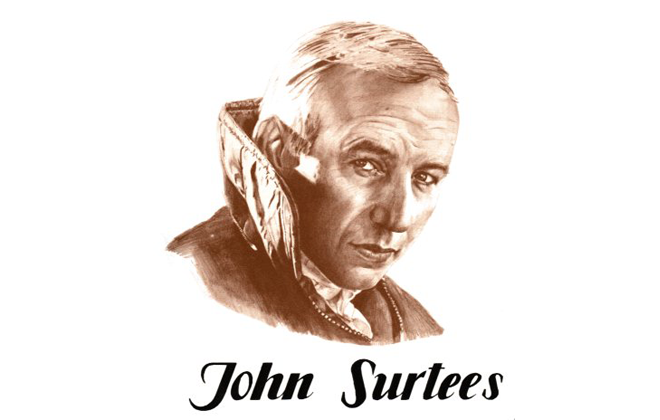 John Surtees was the son of a London motorcycle and sidecar racing rider and salesman. By the age of 11 he was working part-time as a mechanic for his father, before going on to join the Vincent HRD company for an engineering apprenticeship.

By 1949 despite being under-age, he had started racing motorcycles. His first race was on a 500cc Excelsior B14, but he soon switched to a Triumph Tiger 70. Surtees motorcycle career included British Championships, 7 World Championships and 6 Tourist Trophy victories on the Isle of Man.

Surtees, in 1960, retired from motorcycles as World Champion and also competed in his first Formula 1 events finishing second in his third race. In the early 60’s he drove for Cooper and helped develop the Lola Formula 1 car, finishing second in both the British and German Grand Prix, but winning at both Mallory Park in England and at Longford in Tasmania, Australia.

In 1964 Surtees won at Syracuse, Italy in the V-S Ferrari and in Germany and Monza which, together with other high placings, at the age of 30 won him the Formula 1 World Championship. In the mid 60’s Surtees won numerous Formula 2 and sports car events before being involved in a near fatal accident at Mosport, Ontario.

In 1966 Surtees and his Lola-Chevrolet won the inaugural Canadian-American (Can-Am) Challenge Cup, and also won with Ferrari in Belgium and Cooper Maserati in Mexico to finish second in the Formula 1 World Championship.

For 1967 and 1968 Surtees drove for the Honda Formula 1 team getting numerous high placings and winning the September 10 Grand Prix at Monza, Italy.

In 1970 Surtees, having built the Surtees Formula 5000 cars that won both the British and American Championships, decided to build and drive his own Formula 1 car. For the first 3 races of 1970 he raced at McLaren Ford M7C and for the British Grand Prix he used the Surtees Ford T57, winning the Olton Park Gold Cup.

In 1972 after his cars had won the European Formula 2 Championship and Surtees had personally won the Imola Italy Gold Cup and Japanese Grand Prix with a Surtees T510, he announced he would forthwith only do occasional development driving because of the pressures in the management of his teams.

Surtees is the only man to win World titles on both two and four wheels.