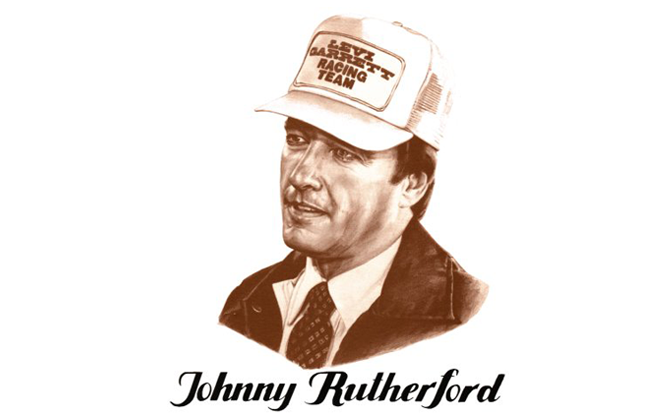 Johnny Rutherford is a man of wide interests. He once flew his own P-51 Mustang, and has said that he would like to be a fighter pilot if he wasn’t in racing. In fact, his hero is General Chuck Yeager. Rutherford enjoys painting, rides in celebrity cutting-horse competitions, shoots in celebrity sporting clay tournaments, and works as a television motorsports analyst.

But his outside interests haven’t interfered with his being one whale of a race driver.

Rutherford began racing in 1959, driving Modifieds at Devil’s Bowl Speedway near Dallas, TX. He advanced to sprint cars, and in 1965, he was the USAC sprint champion. He made his debut in Indianapolis-type cars in 1962, and his first victory on that circuit came in 1965, when he captured a 250 miler at Atlanta.

Rutherford has paid for his prominence in racing. In 1966 he crashed in a sprint car event at Rossburg, Ohio breaking both arms. It happened a week before practice for Indianapolis. He had lined up a strong ride for the 500, but he was sidelined for a year. In 1968 he suffered severe hand bums in a wreck at Phoenix.

Rutherford drove in Winston Cup races occasionally. He won the first one he ever started. It was in a 100-miler qualifier for the 1963 Daytona 500. At that time, those events counted as official races.

Rutherford was surprised when legendary stock car mechanic Smokey Yunick asked him to drive his Chevrolet at Daytona. ‘It was the first time I’d ever been in a late model stock car,” he said. “Smokey had been watching my career as a sprint car driver and was looking for a new driver.”

Veterans Joe Weatherly and Fireball Roberts tutored Rutherford. “Joe said, ‘If the car is right, just flatfoot it.’ I did and I set a record.”

But Rutherford’s future was in Indianapolis-type racing, and he drove the circuit until he hung up his helmet.