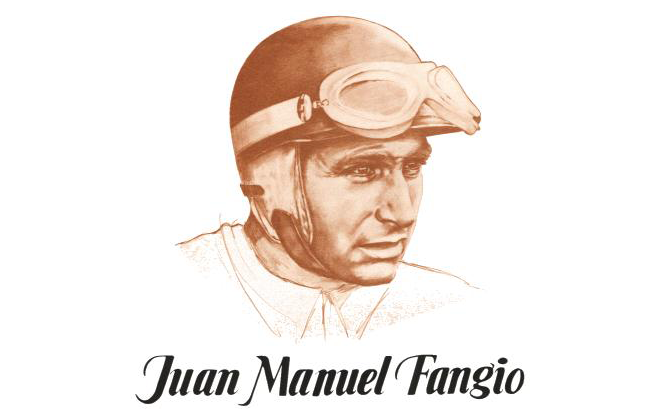 Born on June 24, 1911 near Balcarce, Argentina, Juan Manuel Fangio started out as a mechanic. But by age 23, he had driven in his first race in a converted Ford taxi that disintegrated during the event.

His early efforts as a driver were far from successful. But he worked persistently, supporting himself as a mechanic. Just before World War II, he moved into stock car racing in a Chevrolet and won the Gran Premio International del Norte, a race from Buenos Aires to Peru and back – a distance of 6,000 miles. He and his Chevrolet became famous overnight.

Fangio was 36 and considered “over the hill” by many when he began his assault on Europe. In 1949, he won six times in 10 races and became a national hero in Argentina.

In 1954, Fangio, who had become as popular in his adopted Italy as Argentina, made a mid-season switch from Maserati, for which he had been driving since 1952, to Mercedes-Benz.. He had won twice for Maserati in 1954 and then four more times for Mercedes to win a second championship.

He became a sensation. He won four times for a third title in 1955 and he won three more times for Ferrari – Mercedes had quit the Grand Prix circuit – and claimed a fourth championship in 1956.

Back with Maserati in 1957 and at the age of 46, Fangio won a fourth title. Maserati’s equipment was virtually obsolete at the time, but Fangio’s skill as a driver made up the difference as he won four times. “With most drivers, you figure 25 percent driver, 75 percent car,” said Phil Hill. “With the old man, you know it’s 40 percent driver, 60 percent car, so he’s already got us beat with that something extra that’s inside him.”

Fangio’s skill was never better detailed than in the German Grand Prix of 1957. He drove his plodding Maserati against the sleek Ferraris on the treacherous Nurburgring. With the Maserati’s weak rear suspension, Fangio opted not to take a full load of fuel. His strategy was to build up a huge lead on the Ferraris, which would run the race without refueling, pit and then retain the lead.

His pit stop was disastrous. He was 28 seconds behind when he pitted and 28 behind when finished. But he chopped off the distance lap after lap in a brilliant display of skill. He passed Mike Hawthorn on the final circuit and won by four seconds.

The short, stocky Fangio didn’t look the part of a race driver, but with 24 Grands Prix wins and countless others, he is one of the finest who ever lived.