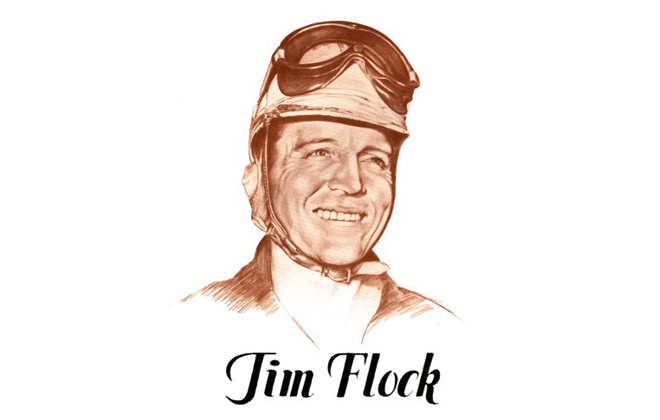 Julius Timothy Flock was, in the fledgling years of NASCAR’s Grand National (now Winston Cup) circuit, more than a champion. He was a genuine character, joining the likes of Curtis Turner, Joe Weatherly and his own brother Fonty as an example of the rowdy daredevil that was the sport’s pioneer driver.

He was a two-time champion, first in 1952 while driving the legendary Hudson Hornet and again in 1955, while campaigning a Chrysler 300 for Carl Kiekhaefer. That same year, he won 18 races and 18 pole positions, both thought to be unbeatable. Indeed, his number of wins during the season stood until Richard Petty raced to 27 victories in 1967

In his career, Flock won 40 races, ranking him 12th on NASCAR’s all-time list.

It seemed only natural Flock should take to cars and racing. His father was a bicycle racer of some repute and owned the first car in Ft. Payne, Ala. His older brother Carl raced boats before becoming successful in real estate. His brothers Bob and Fonty carved their own niche in stock car racing and competed alongside Tim. For a time, they were known as the “Fabulous Flock Brothers.” Younger sister Reo was an aerial daredevil and expert skeet shooter. Sister Ethel was a stock car driver in her own right.

Tim saw his first race in 1937 and he was hooked. He tried to get his brothers to let him drive, but they told him to bide his time. So he worked as a taxi driver in his hometown of Atlanta and then spent time as a fireman, bellhop and a parking lot attendant.

In 1948, he began to race a car owned by Ethel and her husband. He won for the first time in a 35-lap feature at North Wilkesboro, N.C. He decided he would make racing his livelihood and did well at it, moving up to Late Model Stocks owned by Ted Chester.

As many of the top drivers of his day, Flock raced on the beach course in Daytona Beach, Fla., the foundation layout for what was to become the Grand National circuit. He finished second in 1950 and again in ’51 before winning it in ’55 in Kiekhaefer’s car.

In 1952, Flock and Herb Thomas staged a furious battle for the championship. As the season wound down, they were separated by only 200 points. When the final race of the season at West Palm Beach, Fla., rolled around in November, all Flock had to do was start and the title was his.

He did more than start. On lap 64, his Hudson hit the retaining wall and flipped over, skidding down the frontstretch on its roof. This prompted Flock to say, “I bet I’m the only guy who ever won a championship while on his head.” That year, he won eight times in 34 races.

In 1955, the peculiar Kiekhaefer entered the sport. He had made millions selling outboard motors and he used racing to enhance his sales. He selected Chryslers and Flock, who had quite a year earlier. It was to be a happy union. They won most of the races they entered. Eleven times Flock led every lap in an event and, with 18 wins, he easily won his second championship.

Flock was never shy. He liked company and he liked to laugh. No one who knows anything about stock car racing can fail to recount his days with “Jocko Flocko,” the pet monkey who served as his co-driver for a time.

Flock quit while he was ahead. He was financially sound and he wanted to keep it that way. Tim Flock attended every Hall of Fame induction ceremony up until his death in 1998.  He will be missed.