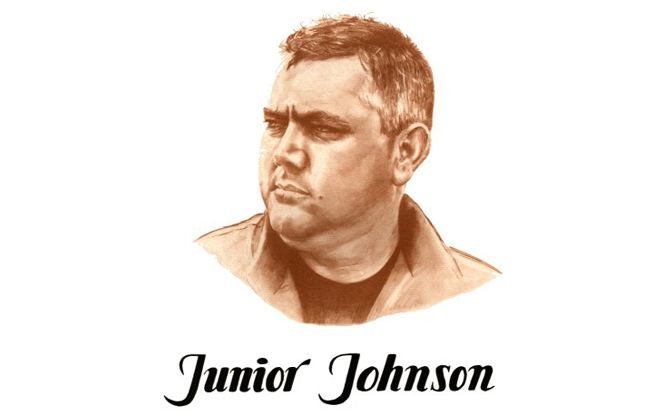 Junior Johnson stepped out from behind a mule, into a stock car and moved into racing legend.

No other man is quite the living embodiment of what the sport is all about. He was born in the rural South, in Wilkes County, N.C., and tales of whisky trippin’, hard racin’ and plain old country living surround him. He became one of the top drivers in NASCAR, retiring at the tender young age of 34 with 50 victories to his credit.

Although his first official race is listed as the Southern 500 in Darlington, S.C., in 1953, he was driving long before that. In the late ’40s, his brother L.P. came to him with a proposition that would change his life.

Johnson was plowing his garden, plodding along behind a mule, when L.P. approached him and asked him if he would like to drive L.P.’s car in a Modified race at nearby North Wilkesboro Speedway. The race wasn’t much, a fill-in between the heats, but Johnson figured it would be more fun than plowing, so he agreed. He finished second.

From there, he went on to compete in various events until he made his first Winston Cup start in ’53. By the time he won his first superspeedway race, the 1960 Daytona 500, he had already compiled an impressive list of victories.

Through the first five years of the ’60s, Johnson won 11 times on the major speedways, with, of course several other victories elsewhere. He won the National 500 at Charlotte Motor Speedway twice in succession (1962, 1963), the Dixie 400 at Atlanta International Raceway (1963) and the Rebel 300 at Darlington (1965), among others.

His last race was the American 500 at Rockingham, N.C., in 1966. His 50 wins alone were enough to establish him as one of the NASCAR greats, but the best was yet to come.

As a team owner, Johnson produced more victories than any other man. His cars won 128 races over the last 24 years, dating up to the midway point of the 1990 season.

Yarbrough won seven races in 1969, including the vaunted “Triple Crown” of stock car racing, composed of single-season wins in the Daytona 500, the World 600 and the Southern 500. With Allison in 1972, Johnson brought Chevrolet back into racing with 10 victories. Yarborough won three straight Winston Cup championships in 1976-78 behind the wheel of Johnson’s cars, a feat unequaled. For six years, 1981-86, Waltrip drove for Johnson, winning three Winston Cup championships and posting the best win record in consecutive seasons, 1981-82, with 24 victories.