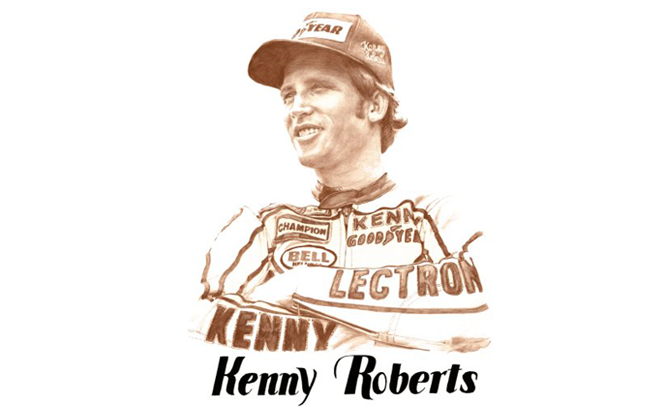 Kenny Roberts is recognized as one of the all time greats of motorcycle road racing. His mystique is not only of a winning record, which includes three back-to-back 500cc World Championships and two American Motorcycle Association Grand National Championships in the United States, but also the manner and style in which he earned his impressive list of credentials.

Roberts was born on December 31, 1951, in Modesto, CA, an area of the country that seems created for motorcycle riding and competition. Roberts began riding in amateur events at the ripe age of 13. It didn’t take long for him to begin his championship winning ways as he won the Oregon State 100cc Dirt Track Championship in 1969. The next year he captured the United States AMA National Novice Championship and in 1971, he moved up the ladder to the AMA Junior Division and won the National title.

His first of two consecutive United States AMA Grand National Championships came in 1973 and he followed that with a second place in the National AMA standings in 1975. He made his debut in International Grand Prix motorcycle racing in Aspen, CO, in 1974 on a 250cc Yamaha. After winning the pole position, he was leading the race when he was pitched from his motorcycle. He remounted and finished an impressive third in his first GP event.

In 1978, Roberts became the first American to win the 500cc World Motorcycle Racing Championship, a feat he repeated in 1979 and 1980. Over the next three years he finished third, fourth and second, respectively in the World Championship standings.

In 1984, Roberts backed off from active competition to from Team Roberts in conjunction with Yamaha Motor Corporation, which had grown to rely on his expertise in racing and development advancements. Before that, however, Roberts won the Daytona 200 for the fourth time, the Imola 200 for the second year in a row and the Laguna Seca Classic for the sixth time. Roberts career record shows 22 500cc Grand Prix victories.

Team Roberts has been at the forefront of high-tech motorcycle development. It was the first team to win a Grand Prix using carbon fiber brakes in 1988 and it was the only team to use on-board electronic equipment on a daily basis during 1989.