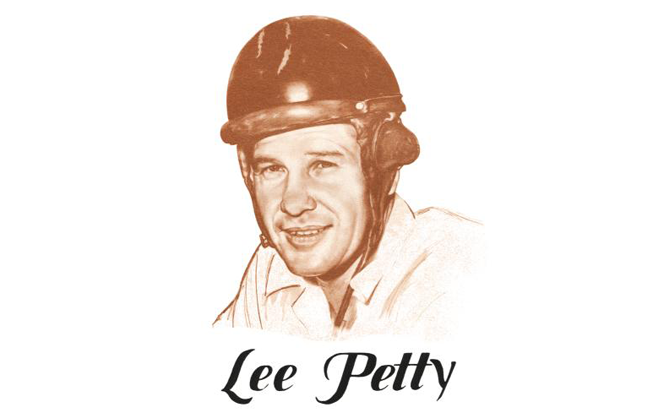 Out of the Piedmont of North Carolina, in a small community called Randleman, Lee Petty fashioned one of the greatest NASCAR careers and founded a dynasty that lives to this day.

Born near Randleman on March 14, 1914, Petty was a star athlete in high school and afterward decided to attend King’s Business College in nearby Greensboro, a move that would benefit him later in his racing operations.

He always liked driving cars fast but did it primarily as a hobby. He was a family man who provided for his wife and two boys Richard and Maurice by doing such jobs as mechanic, taxi driver and truck driver.

The first NASCAR race was scheduled for June 14, 1949 at the Charlotte, N.C., fairgrounds. It got Petty’s attention and he entered the family Buick, which he rolled four times in the race. But he was hooked. He bought a Plymouth and went racing, using his sons as assistants and learning by doing. He was 35 years old when he started.

But he quickly displayed his talent. He never finished lower than sixth in the championship standings. In addition to his three titles, he was second twice, third three times and fourth three times. He was sixth in 1960.

Racing became a family business. Everyone became involved. Shops were constructed and maintained on the family’s home grounds in Level Cross, N.C. From there, Petty ventured forth on the NASCAR circuit. His best year was 1959. He finished 41 of 49 races and won 12 times. It was in that year he won at the fabulous new Daytona International Speedway in the inaugural Daytona 500.

Petty had won on the beach course during Speed Weeks, but no one had ever seen the likes of the new Daytona monster. The race ended in high drama – a photo finish between Petty and Johnny Beauchamp. It took three days’ worth of study before Petty was officially declared the winner.

During a 100-mile qualifying race at Daytona the next year, Petty was seriously injured after his and Beauchamp’s locked cars went hurtling through the guardrail into the parking lot. Petty left the hospital after four months. His driving career might have been over, but he still maintained management of Petty Enterprises which, with able assistance from sons Richard and Maurice, was beginning to flourish as NASCAR’s most powerful and successful racing organization.

Today, Petty is recognized as one of the building blocks of NASCAR. His personal driving record was such that he still ranks fifth on the all-time victory list. But more than that, he founded a dynasty that has made the name “Petty” synonymous with “excellence.”