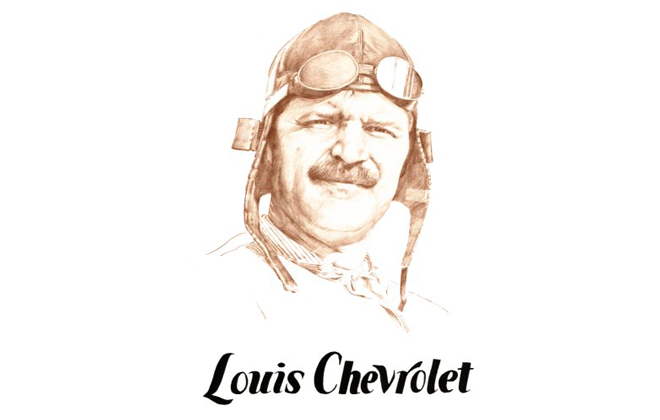 When 21-year-old Louis Chevrolet left his home in La Chauxde-Fonds, Switzerland in 1900 to move to North America, he set in motion a chain of events that would leave indelible marks on American automotive and motorsports history.

His passion for performance first took him to the race track in 1905, the same year he got married, and he beat the great Barney Oldfield in a May 20th race in the Bronx, NY, driving a 90 horsepower Fiat at a speed of 69 MPH.

In 1907, Chevrolet’s racing reputation led to his first encounter with W.C. Durant, the “father” of General Motors, who put his genius to work on the creative design concepts that drove the famous Buick racing team to greatness.

Chevrolet drove a Buick to victory in the fifth “Indy car” race ever run, a 395.65-mile event on June, 1909, in Crown Point, IN. It was part of the AAA National Championship, which included races at the brand new Indianapolis Motor Speedway.

His fateful encounter with Durant eventually led to the formation in 1911 of the Chevrolet Motor Company where, despite little formal education, Chevrolet designed and engineered the first version of the vehicle which more than 125 million units later, still bears the Chevrolet name.

Chevrolet’s fierce independence and eye for perfection caused him to leave the infant Chevrolet company and embark upon a venture which took him back to his first love, racing.

He formed the Frontenac Motor Corporation to build high performance cylinder heads for Ford engines. His 10 career Indy car wins made him the most successful of the three racing Chevrolet brothers, Arthur, Gaston and Louis. He won over 27 major events during his career.

While Gaston was the only Chevrolet brother to drive to victory in the Indy 500 in 1920, Louis designed and built Gaston’s race winning Monroe, as well as the straight-eight Frontenac driven to victory by Tommy Milton in 1921. A unique feat, having designed two completely different cars to win two consecutive races at Indianapolis.

His imagination and skill served the automobile industry, the racing world and the driving public well indeed. Obviously his name and inventions have never been and never will be forgotten.

Louis Chevrolet, whose motto was “never give up;’ took his last laps at Indy in 1926 as the official pace car driver.