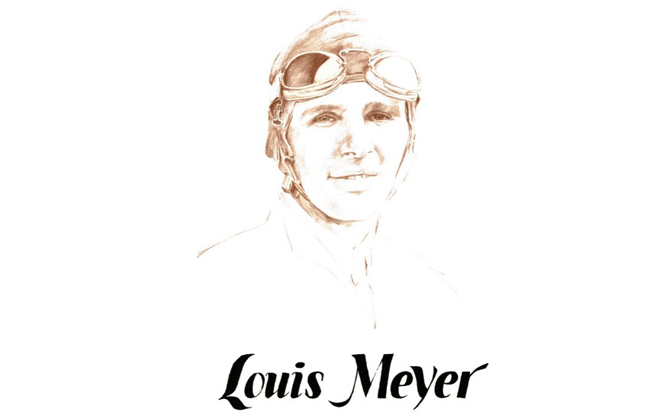 Louis Meyer was born on July 21,1904, in lower Manhattan. His father had been a bicycle racer in France and became a barber after coming to the United States. But he moved his family to Los Angeles, where Louis spent most of his youth.

Louis’ older brother, Eddie, loved cars and speed and introduced the younger Meyer to racing. The two traveled the racing circuits together until at last, Louis took his chance at driving himself. It was at Ascot Speedway, in Los Angeles in 1924 where Louis climbed into his brother’s Model T Special. When the starter’s flag waved, he hit the accelerator and was off.

He lasted just three laps, spinning right in front of the rest of the competition, which scattered to avoid the whirling Model T. Eddie brought his brother into the pits and took over the driving chores.

So Meyer pressed on as a mechanic, something at which he was already adept. He had been an established competition mechanic since he was 18 and by the time he was 22, he was recognized as one of the country’s best. It was that reputation which led Frank Elliott to sign him to maintain a Miller on the board circuit in 1926.

Meyer would test the cars and even though he didn’t run at full speed, it allowed him to learn the characteristics of the premier racing cars of the day. Meyer first went to Indianapolis with Elliott in 1 926 but returned in 1927 hoping to convince someone he was good enough to drive.

Meyer hung around the pits of the Jynx Special where another rookie, Wilbur Shaw, had the ride. When the car needed a new gas strap and a relief driver, Meyer got the nod. He maintained position for 41 laps before turning the car back. Shaw finished fourth and Meyer had his baptism at the Brickyard.

Meyer’s first turn as a regular driver at Indy came in 1928. He lined up a Dusenburg Special to drive, and he worked on it until qualifying day. But then he was told the car was going to be sold and the new owners already had a driver. Alden Simpson, whom Meyer had helped in previous years, came to the rescue. He had bought a Miller 91 and asked Meyer to drive it not only in the Indianapolis 500 but for the entire 1928 AAA Circuit season as well.

Meyer won the Indianapolis 500 in his first try and at the tender age of 23. Additionally, he went on to win the AAA season championship, which included four victories at the Altoona board track. In 1929, Meyer finished second in the Indy 500 but won a second consecutive AAA season title.

In 1933, Meyer returned to Indy with another Miller and won again easily, finishing four laps ahead of Shaw. He also won his third AAA crown.

By this time, Meyer was the part owner of a garage and an expert at making close tolerance parts for racing engines. Harry Miller had sold his engine plant to Fred Offenhauser in 1933, and Meyer and Offenhauser did business. In 1936, Meyer returned to Indianapolis in a Miller 4 tied into a Ford. Fuel allotment had been cut to 37.5 gallons, but that hardly bothered him. His car averaged 14.46 miles per gallon despite the fact he set a race record 109.69 mph in another easy victory. Meyer thus became part of immortality, becoming the first man to win the Indianapolis 500 three times.

In 1939, he went all out to win his fourth Indy. He had an engine be built himself but it blew in final practice laps. He flew in a new engine block from Los Angeles, working all night on the car. He was so tired he had to take a nap shortly before the start of the race.

His crew woke him up and he climbed into the car. Unlike his usual style, he jumped right into the lead and set a torrid pace. With 17 laps to go, Meyer found himself in a scrap with Shaw, the only driver who could keep up. Shaw took the lead in the first turn and as Meyer moved outside to dive down off the banking and force his rival out of the groove, his car spun and smacked the wall before coming to a halt at the lower end of the track.

The damage was superficial and Meyer got back into the race. Miraculously, he fought his way back into contention. He was second behind Shaw on lap 197 when he went through an oil slick in the second turn. The car spun wildly toward the wall, hit some wood bracing beams and flipped. Meyer was thrown from the car and taken to the first aid building, where it was determined he was virtually unscathed. His brother rushed to his side, whereupon Meyer said, “Eddie that’s it. I’ll never drive a race car again.”

That same year, Ford offered Meyer the opportunity to rebuild passenger car engines. With Lou Welch as his partner, Meyer opened his plant in Los Angeles. In 1946, he sold out to Welch and bought out Offenhauser’s shop and, along with long time friend Dale Drake, opened the Meyer and Drake Corporation. Meyer continued to build the Offy engine and let it evolve in the Midget, Sprint and Championship racing division.

Fuel injection, greatly improved materials, better cooling and other improvements all came under the Meyer-Drake banner. The engine came to dominate USAC racing. In 1964, Meyer sold the business to Drake and assumed responsibility for Ford’s 4-cam Indy engine.

In 1972, Meyer retired and then moved to Searchlight, NV with wife June to relax, enjoy the fishing and the sun. His wife died in 1990 after 65 years of marriage, but Meyer kept tinkering with cars until he “returned” to competition in 1992, at the age of 87. He drove a Ford that had been modified to electric power by one of 10 competing high school teams in the Solar and Electric 500. He averaged 60 mph for 40 laps and won his portion of the race, thrilling youngsters who had only heard or read about his fabulous racing career.