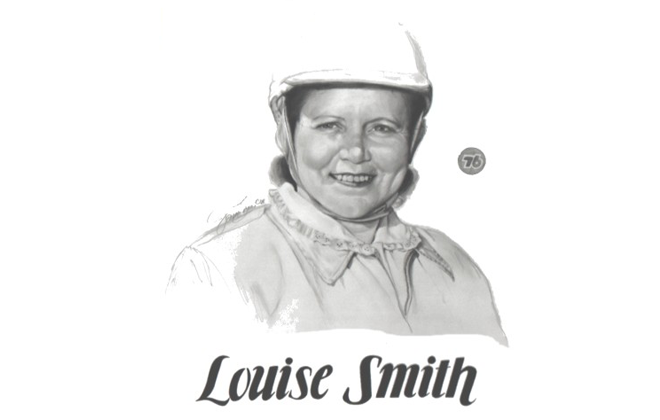 Louise Smith was one of the true pioneers of early stock car racing, running Modifieds from 1946 thru 1956, and actually competing in the first stock car race she ever saw.

The Greenville, South Carolina resident helped Bill France, Sr. promote early NASCAR races from Daytona to Canada. She was a novelty as a female driver, but her hard-charging, fearless style of driving made her a crowd favorite wherever she went.

When France brought his show to Greenville in 1946, he was looking for a woman to race with the men, and he found just what he was looking for in Louise Smith, who allegedly had outrun every lawman in the Greenville area. Although she had never even seen a race, much less been in a race car, Smith agreed to do it. She finished third in a 1939 Modified Ford coupe, and was hooked forever.

And she certainly wasn’t there just for show. Smith won 38 Modified races during those 11 years, at tracks from New York to South Carolina to Alabama. During those years, she held her own against the top drivers in the sport, legends such as Buck Baker, Curtis Turner, Fonty Flock, Red Byron and Roy Hall.

In 1947, she took off for Daytona in her husband’s brand new Ford coupe to watch the races on the beach, but when she got there, she couldn’t stand it. She entered the shiny new family car in the beach race and, of course, wrecked it. The Greenville paper carried a picture of her wreck, and the news was all over Greenville before she ever got home.

Smith is perhaps remembered as much for some of her spectacular crashes as she was for her aggressive driving, breaking almost every bone in her body at some point during her career. One race at Hillsborough almost took her life, leaving her with 48 stitches and four pins in her left knee.

She quit racing in 1956, but returned in 1971 to sponsor cars for numerous drivers on the way up. Among others, she backed Ronnie Thomas’ Rookie of the Year effort in 1978.