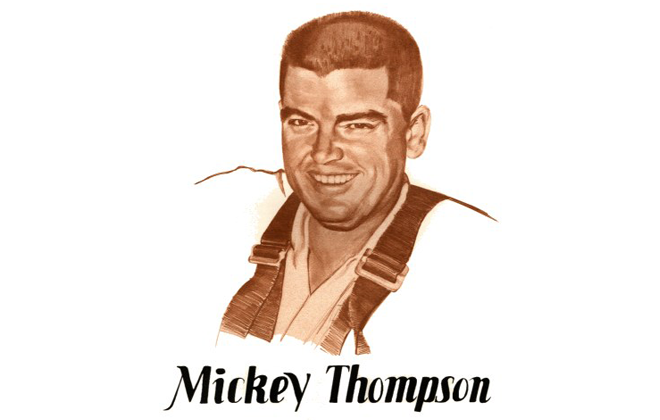 Mickey Thompson was a record-breaking racer, businessman, and designer. His contributions to the racing world are vast and legendary, many of which can still be seen today. He has unquestionably earned his spot in the International Motorsports Hall of Fame and continues to be a great inspiration to aspiring racers and innovators.

Marion Lee (Mickey) Thompson was born on December 7, 1928, in Alhambra, California. He grew up restoring old Fords and Chevrolets, accumulating mechanical know-how that would continue to serve him in later years. Unlike some legends, he did not start racing immediately, despite his love for cars. After graduating high school, he worked at the Los Angeles Times for about 10 years as a pressman.

However, the call to the track was too strong. He started participating in weekend drag races and was hooked.

Thompson also competed in open road races. In 1953 and 1954 he participated in La Carrera Panamericana in Mexico. The original race was a border-to-border sedan rally held from 1950 to 1954 and many believed it to be the most dangerous race in the world. Thompson had his own dangerous experience when some of the spectators wandered onto the racecourse. He tried to avoid them but ended up rolling his car and tragically hitting and killing 5 people. Due to the rate at which drivers, crew, workers, and spectators were killed, Mexican officials canceled the race after ’54. It was revived later in 1988.

He is more famously known for his accomplishments at the Bonneville Salt Flats. Just at Bonneville, he set 295 records.  In 1950, at the age of 21, he went to Bonneville for the first time with a flathead-powered 1936 Ford Coupe and returned the next two years with two flatheads in a bantam car. Then, in 1952 he built a four-cylinder Pontiac dragster. Before long, he began securing his status as a racing giant.

This was not good enough for Thompson. The world record was set in 1947 with a shocking 394.2 mph. Thompson set his site on beating it and in 1959 he had just the car for the job. The now-iconic Challenger 1 was a home-built four-wheel-drive vehicle featuring four supercharged Pontiac Engines. It was a little over 20 feet long and 39 inches tall at the cockpit fairing.  With this blue bullet hot rod, Thompson first set a record for his class at Bonneville with 330.51 mph. With a world record so close within reach he did not give up. In 1960, he finally beat it at 406.6 mph. Unfortunately, a broken driveshaft made it impossible to make the return run, making it an unofficial land speed record.

Other notable records he set at Bonneville include four international speed records for the 5-kilometer, 5-mile, 10-kilometer, and 10-mile runs.

In 1960, he introduced another creation of his. The “slingshot dragster” called Assault set the standing kilometer mark at 132.94 mph and the standing mile mark at 149.93 mph. With the Challenger 1 and Assault in his arsenal, Thompson set more than 100 international and national speed records.

Life Off The Track

Thompson also ran a successful business. In the early 1960s, he started Mickey Thompson Enterprises which focused on selling Pontiac speed equipment, then in 1963, he started Mickey Thompson Performance Tires. These racing tires were developed especially for Indianapolis 500 competitors. In the 1970s, the Thompson L60-15s became popular with teenagers putting them on the back of their muscle cars. They were purchased by Cooper tire in 2003.

Always the creator, Thompson entered his cars into the Indy 500. Two of the most famous are Harvey Aluminum Special and Sears Thompson Allstate Special. His racers ranked highly, the rookie Al Miller with the best effort in 1963 in 9th place.

Using his business prowess, he secured a major sponsorship with the model builder Revell. This sponsorship produced one of the best-looking floppers of all time, a funny car based on the Pontiac Grand Am called Revelleader, driven by Dale Pulde.

His passion for the sport led him and his wife, Trudy, to form the Mickey Thompson Entertainment Group. This motocross and off-road vehicle racing show and competition drummed up attraction from more metropolitan audiences. He knew the excitement of the track deserved to spread to a wider audience, integrating racing as an aspect of American culture.

A Family To Remember

Sadly, Mickey and his wife’s good years came to an abrupt and violent end. A deal gone bad between Thompson and a former business associate, Michael Goodwin, led to a civil suit resulting in Goodwin owing the Thompsons a hefty sum of $500,000. On March 16, 1988, Thompson and his wife were shot in their driveway by hit men that Goodwin had hired. After a rollercoaster of investigations and court hearings, Goodwin was finally formally charged with the murders in October 2004. He was officially found guilty on two counts of murder on January 4, 2007. He was sentenced to two consecutive life-without-parole terms. The two hitmen were never found.

As sad as his ending is, Mickey Thompson led a very fulfilling life that has continued to impact the racing world. He competed in over 10,000 races, won at least one championship in various auto racing events, and raced over 1 million miles. He was an innovator who introduced the starting signal and foul-light systems for drag strips, the wide oval tire, brought nitrogen gas shocks to the United States, as well as the Hydro-Barricade to both the racetrack and the highway – a safety measure that has helped save many people. His life and accomplishments deserve to be celebrated and honored, a fact that led to his induction into the International Motorsports Hall of Fame in 1990.