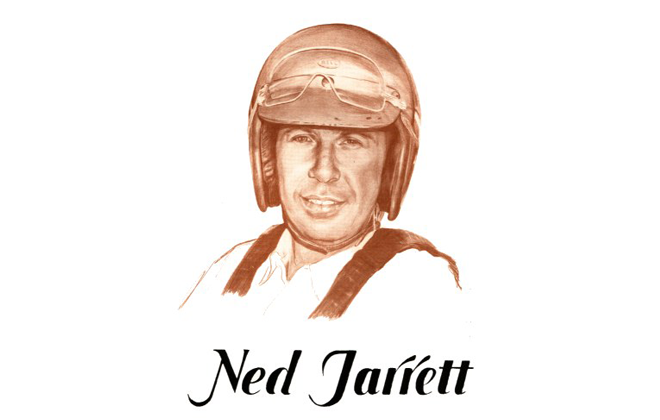 He was called “Gentleman” Ned Jarrett because of his smooth demeanor and pleasant disposition. Yet no one lost sight of the fact he was an intense competitor and one of the best who ever sat behind the wheel of a NASCAR Grand National stock car.

When his career was over, he had won 50 races and two championships. He was a sly, calculating driver. Most of the time on the superspeedways, he preferred to take his time and let others burn out their equipment with overzealous driving. That didn’t work as much as he would have liked only two of his 50 wins were on superspeedways but it hardly mattered. When it came to the rough-and-tumble short tracks, where a man 5 skill mattered most, he was among the elite.

Born in Newton, N.C., as one of four children, Jarrett was introduced to cars early in life. At age 9, his father let him drive the family car to church. He saw some of the early dirt-track races in Raleigh, and that contributed to his plans to race.

He began working with his brother and father in the lumber business at 17 but racing called. In May of 1952, he drove in his first race in Hickory, N.C., and finished 10th in a Sportsman Ford. In so doing, he incurred parental wrath.

It was ruled he could work on cars, but not drive them. But one night, his driver was ill and suggested Jarrett drive the car. He used his driver’s name and finished second. Since the scam worked, Jarrett drove in several Sportsman races under an assumed name – but his father found out. This time the senior Jarrett bowed to the inevitable and gave his son his blessing.

Jarrett slowly but surely began to expand his horizons. He was second in the national Sportsman championship in 1956 but by 1959, he decided to pursue a career in Grand National racing. He bought a used Junior Johnson Ford that year – for $2,000, far less than he had in his bank account and in true Hollywood fashion, he won the only two races he entered and covered the check.

In 1960, he won five races and then, in 1964, he accomplished a unique feat. He won only at Birmingham, Ala., but was among the top five in 22 races and out of the top 10 in only 12 of 46 races. In so doing, he won the Grand National Championship for the first time by a squeak over defending champion Rex White.

In 1964, Jarrett joined team owner Bondy Long with factory support from Ford. He won 15 times, but the title went to Richard Petty – although Jarrett did win his first superspeedway race at Atlanta.

In 1965, Jarrett rose to superstardom. He won 13 races and another Grand National championship. Astonishingly, he placed among the top five 42 times in 54 races. He also won the Southern 500 at Darlington, S.C.

A year later, Jarrett was again in the championship hunt when Ford withdrew from NASCAR. With that, and all of his accomplishments, Jarrett retired, still a very young man. He spent his time in real estate and business ventures.

Only a few years later, he delved into broadcasting. As he did in racing, he made the most of it. He started his own radio show and drew the attention of national television networks. Today, his visage is seen on numerous telecasts, making him one of the most familiar racing personalities in the country.

It may safely be said that for all of his popularity during his racing days, “Gentleman Ned” is even more renowned among a new generation of racing fans.